A 16-year career sitting in the best seat, eh – standing on the best perch, in the house has given Hedges the opportunity to witness and capture the biggest and best moments in the UFC’s history.

We asked Hedges to look back and review the archives to come up with the 20 biggest and most picturesque moments in UFC history from behind his lens. Check out what he came up with as he paints a picture for every astonishing frame.

Chuck Liddell
"The Iceman" celebrates after defeating Tito Ortiz at UFC 47. This photo is probably one of the most published images in my library. One of the best raw emotion frames I’ve ever captured. 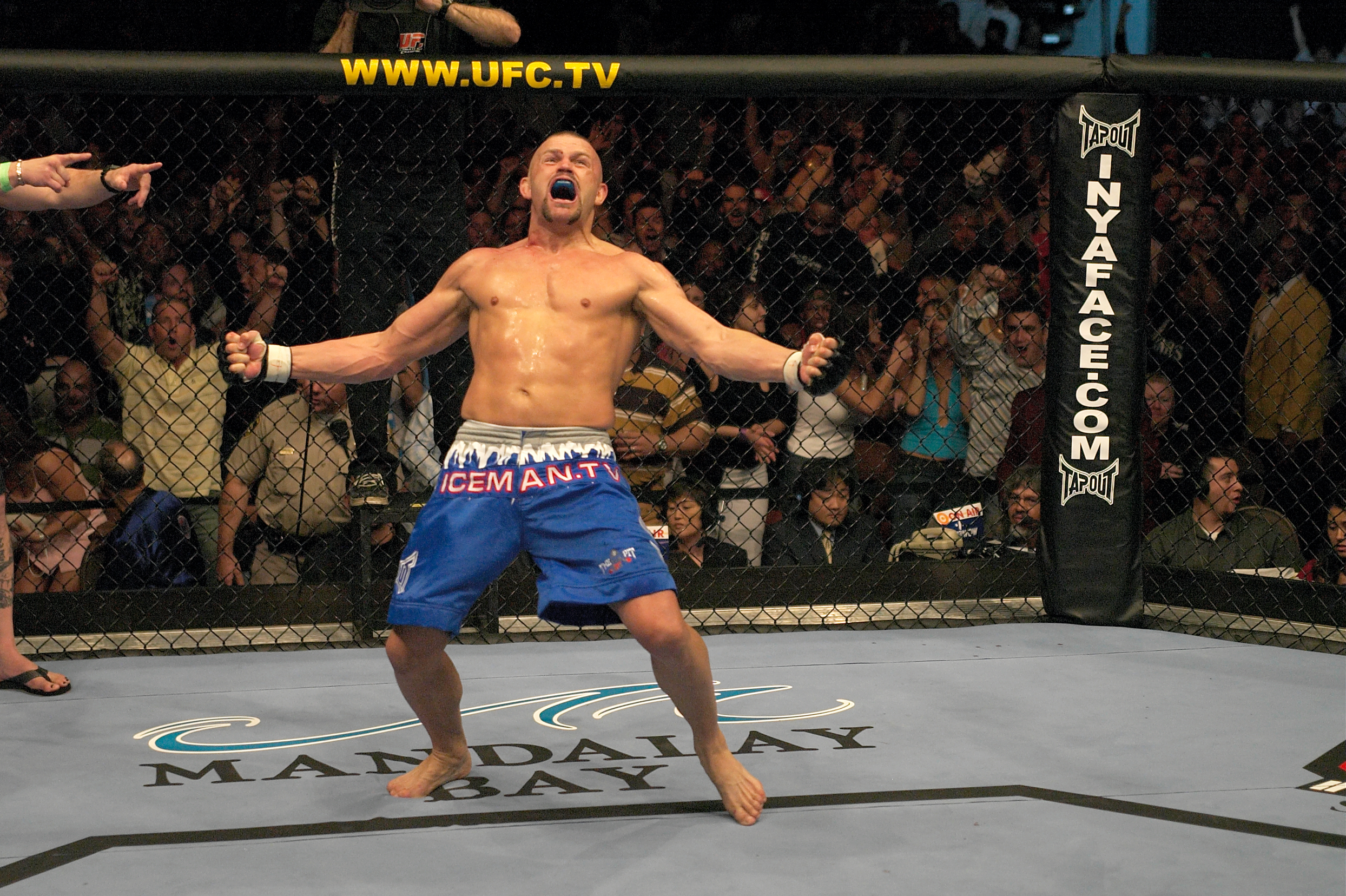 Stephan Bonnar and Forrest Griffin
Both fighters throw their arms in the air immediately following their three-round war at the inaugural Live Finale for The Ultimate Fighter. I had no idea who had won at that moment and all I could think was: “How can you not reward both guys?” 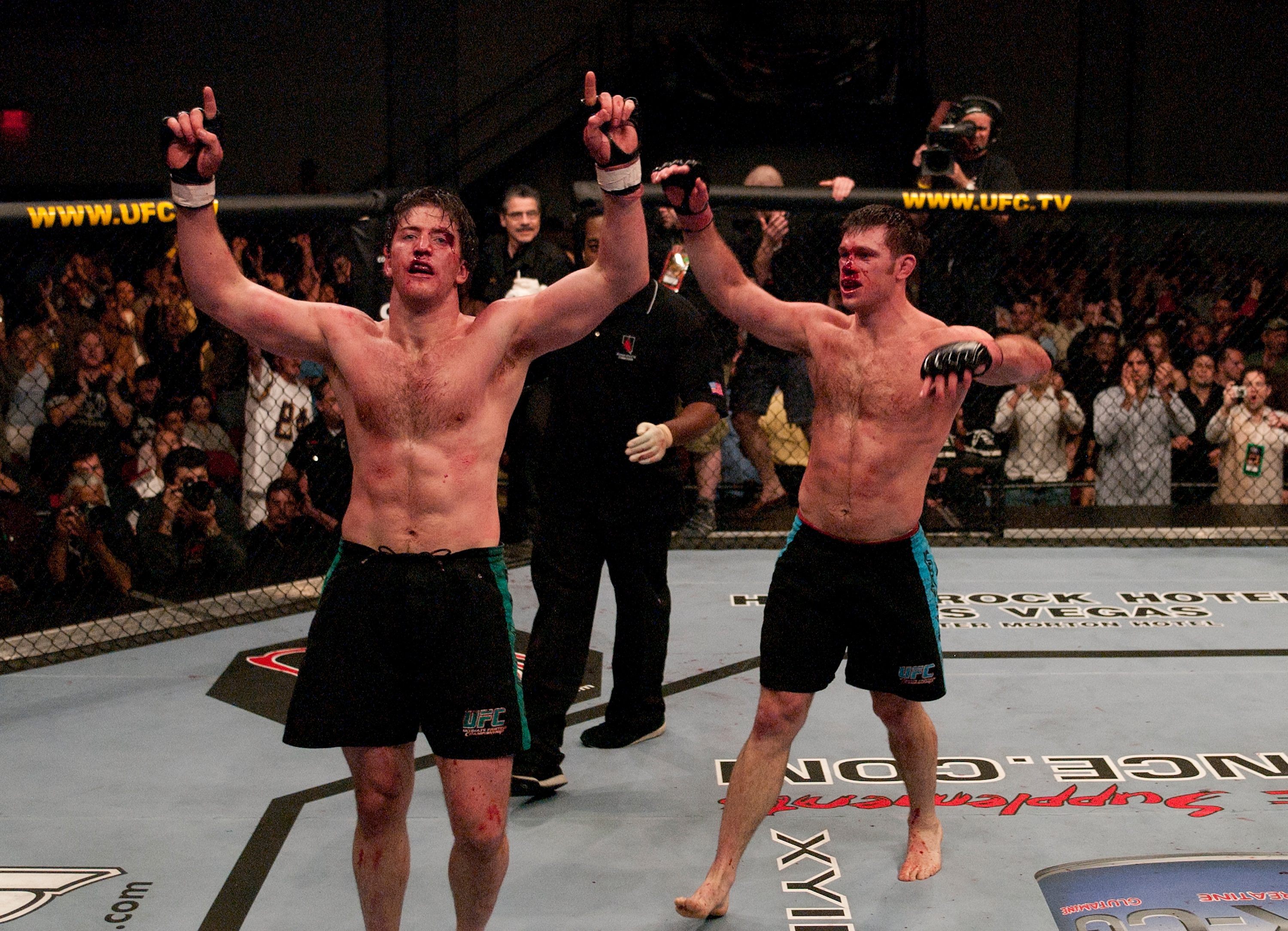 Georges St-Pierre
GSP captures the UFC welterweight title at UFC 65 with a knockout over Matt Hughes. Everyone knew GSP would be a champion someday from the moment he debuted. On that night in Sacramento, nobody was stopping him from realizing his goal. 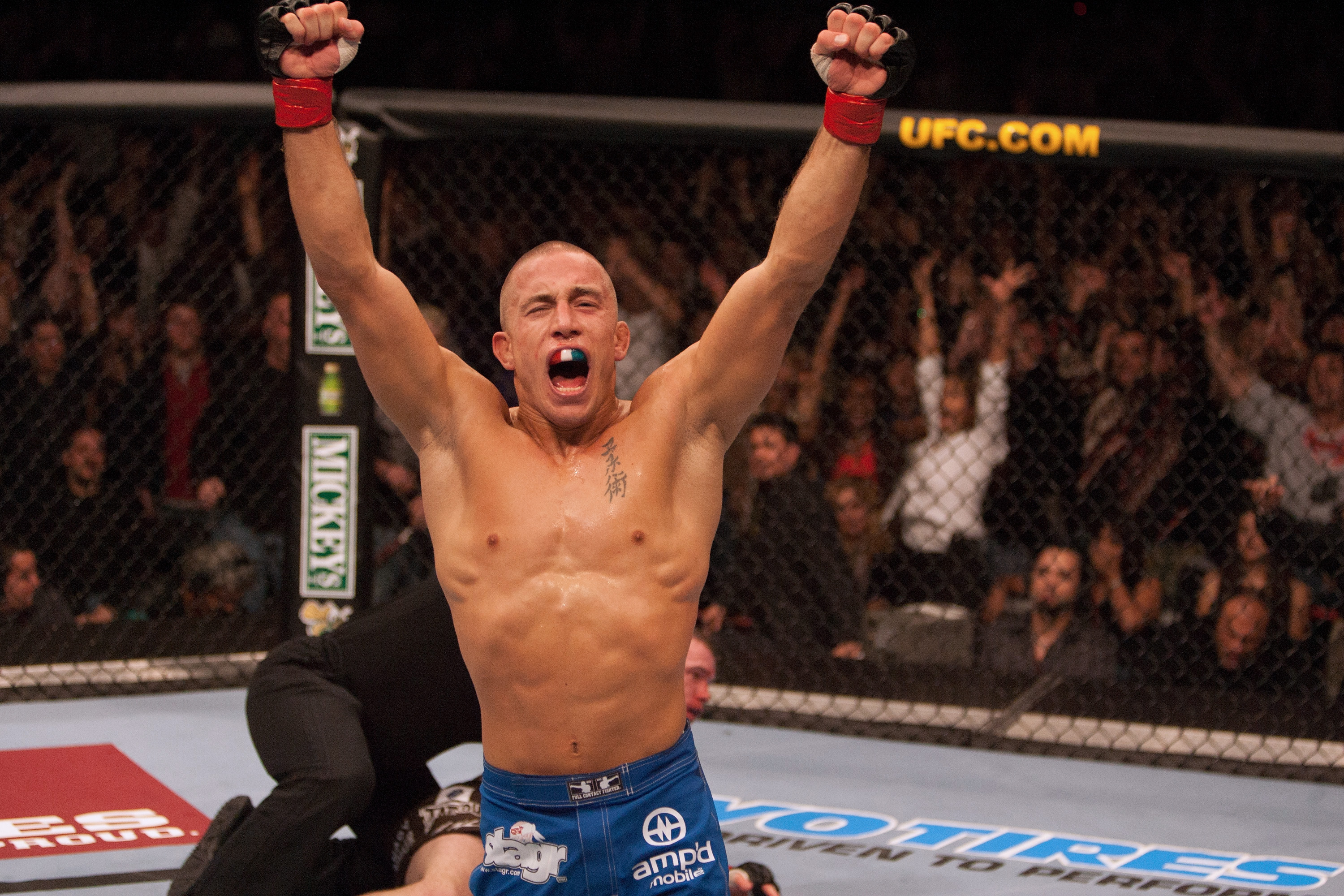 Matt Serra
"The Terror" celebrates in the center of the Octagon with his brother Nick after shocking the world with his defeat of champion Georges St-Pierre at UFC 69 to capture the welterweight title. Serra became the first champion produced from The Ultimate Fighter and shot back to stardom after nearly calling it quits before competing on season four of the show. 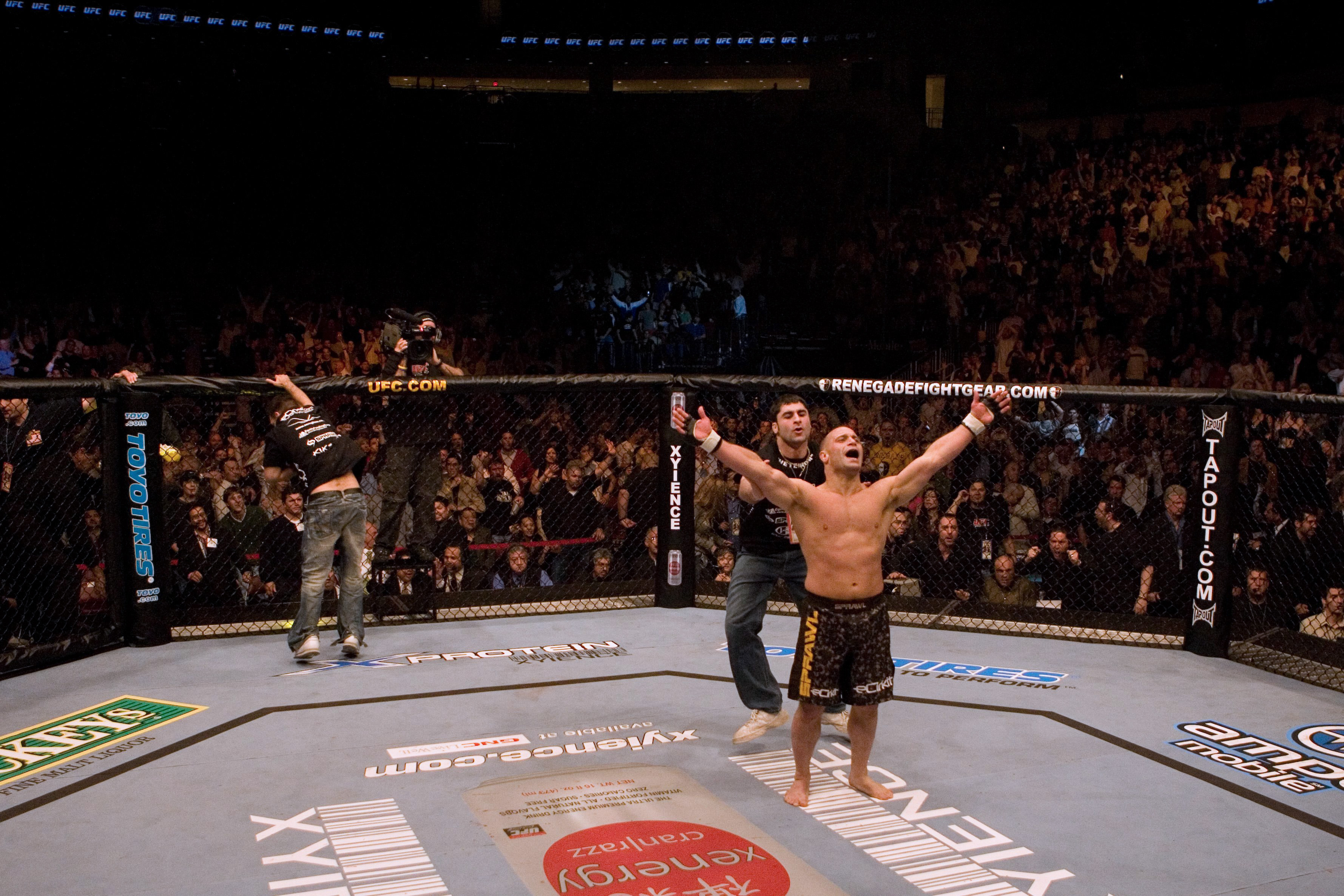 Chuck Liddell and Wanderlei Silva
After years of waiting, fans were finally treated to a tremendous three-round battle between legends at UFC 79. Sometimes, these dream matchups don’t live up to the hype. This one did and then some. One of my favorite fights I’ve ever shot. 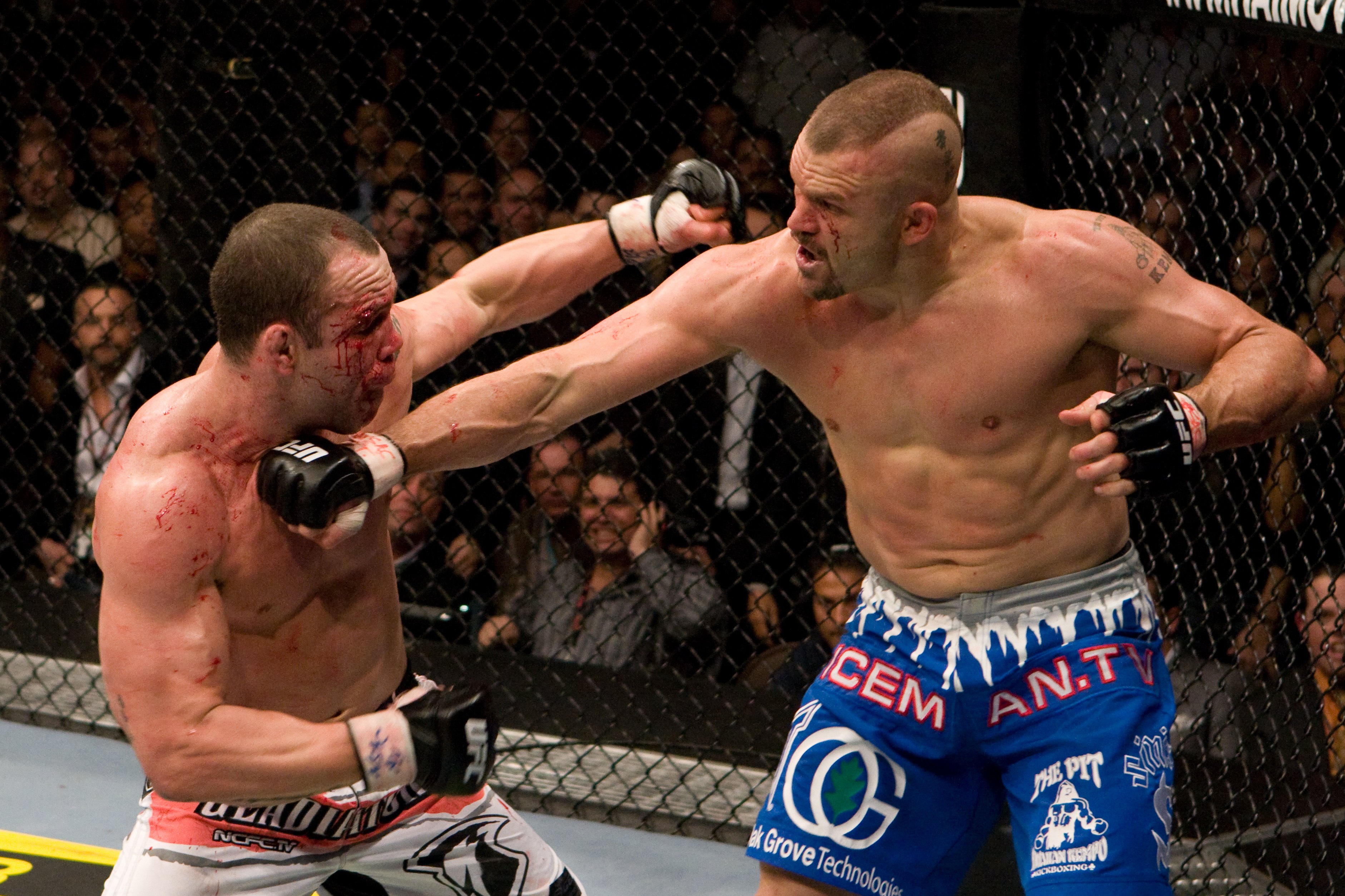 MORE ON UFC 200: Tickets On Sale Now | Complete fight card | Live in Las Vegas on July 9 from brand new T-Mobile Arena | Jose Aldo vs. Frankie Edgar 2 meet for interim title | Aldo vows aggression | Cain Velasquez faces Travis Browne in critical heavyweight clash of top contenders | Dillashaw-Assuncao II set | Johny Hendricks meets Kelvin Gastelum | The home of UFC 200
Brock Lesnar
The Beast battled back from adversity to defeat Shane Carwin at UFC 116. As the fight unfolded, it certainly appeared Carwin was on his way to unifying the UFC heavyweight title. Somehow, Lesnar managed to survive Carwin’s barrage in round one and battled back to submit him in round two. Brock leaped up on the cage just five feet in front of me, and faced straight towards me. I was lucky to be in the right place at the right time, making this iconic image. 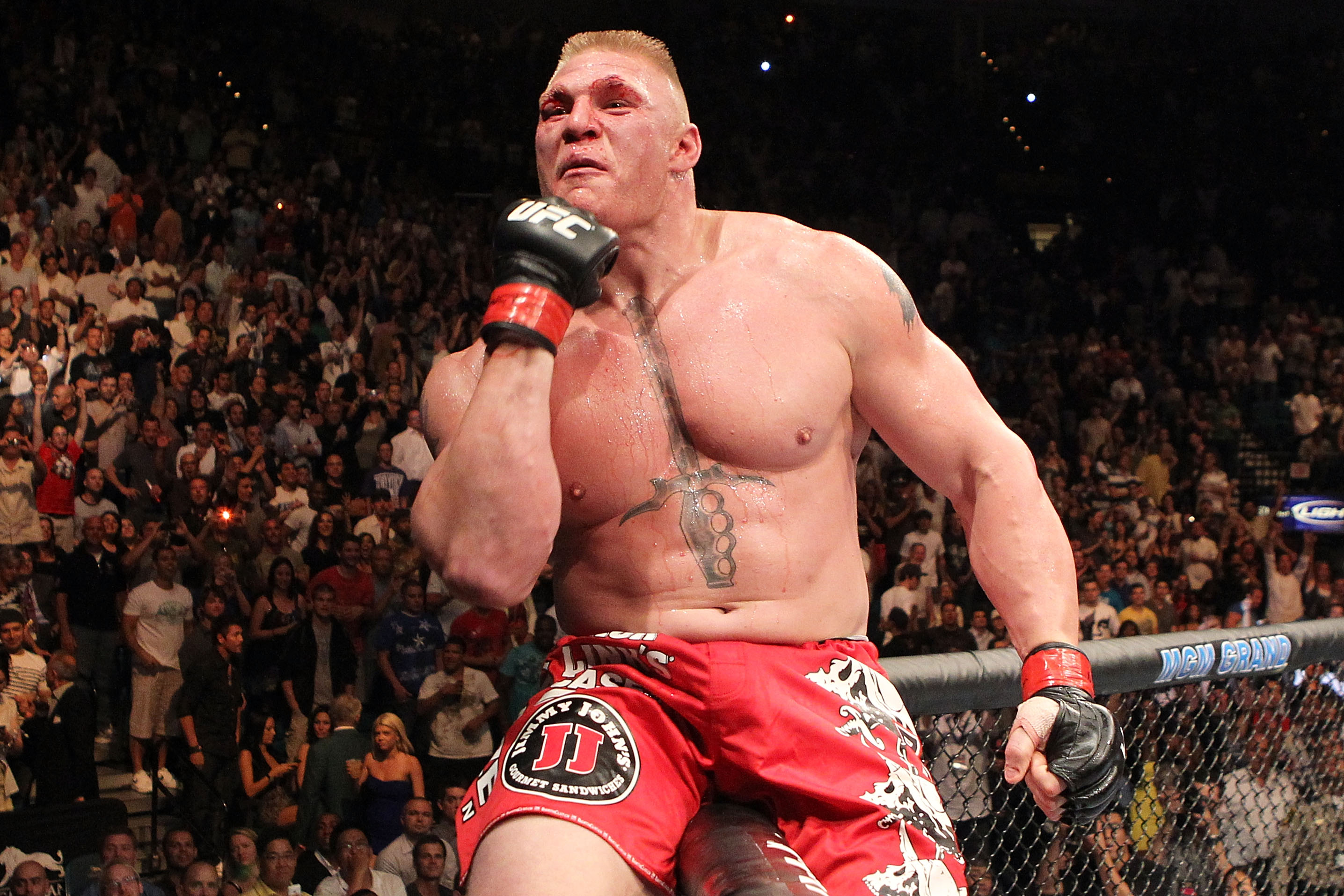 Anthony Pettis
In the final WEC event ever held, Pettis runs off the cage and lands a flush kick to the face of champion Benson Henderson. Pettis went on to win by unanimous decision. I had perhaps the best vantage point of any photographer in attendance for this moment. Pettis had tried a few “off the cage” maneuvers earlier in the fight, but nothing like this kick that floored Henderson in the last minute of round five. 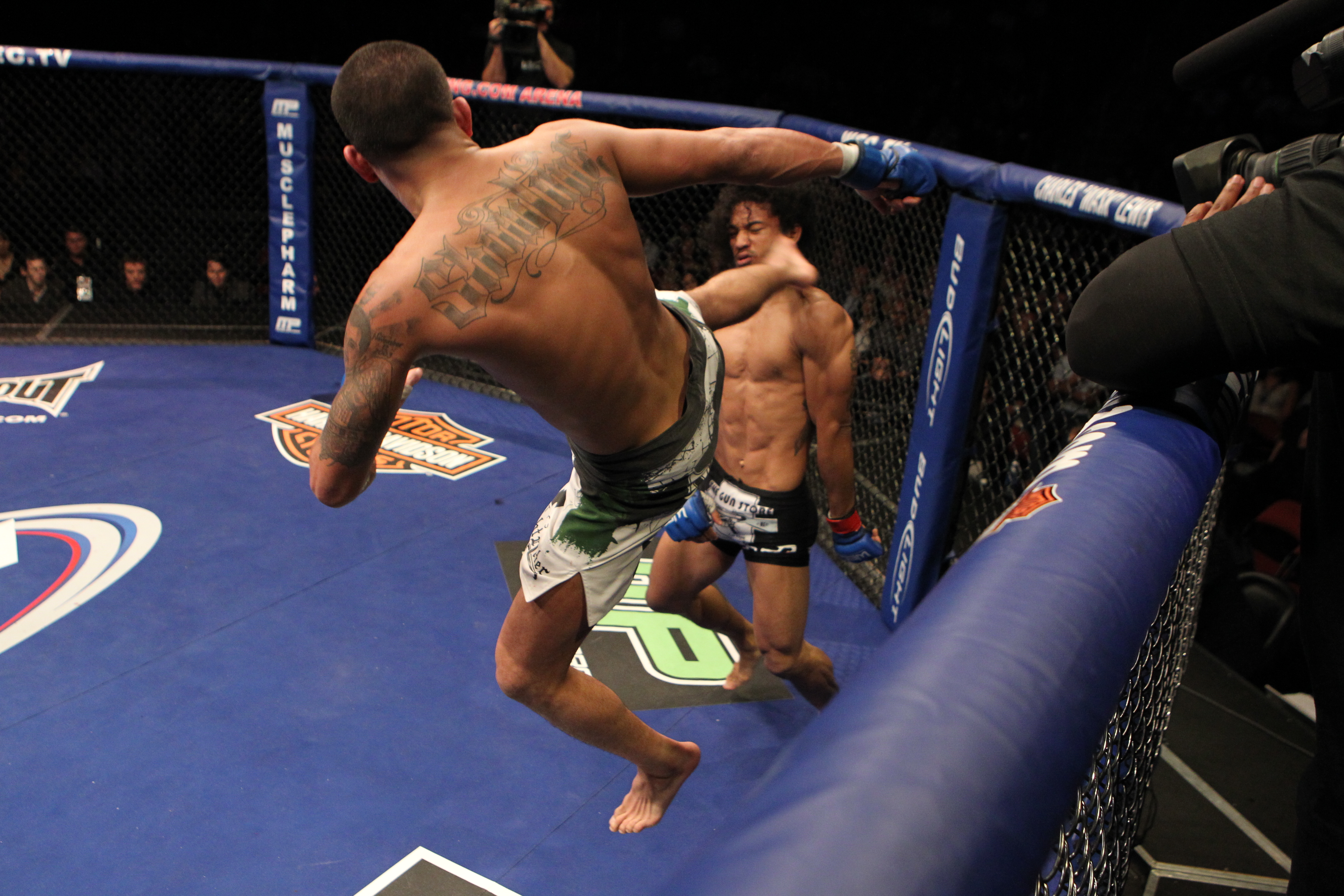 Junior Dos Santos
JDS reacts after his quick knockout of Cain Velasquez to capture the UFC heavyweight title on the debut UFC broadcast on FOX. I expected Velasquez’s title reign to last a long time, but Dos Santos came in and shut the lights out before anyone knew what had happened. It was one of those fights as a photographer that you’d wish had gone a little longer, but I still managed to come away with this frame showing the jubilation and dejection of both men. 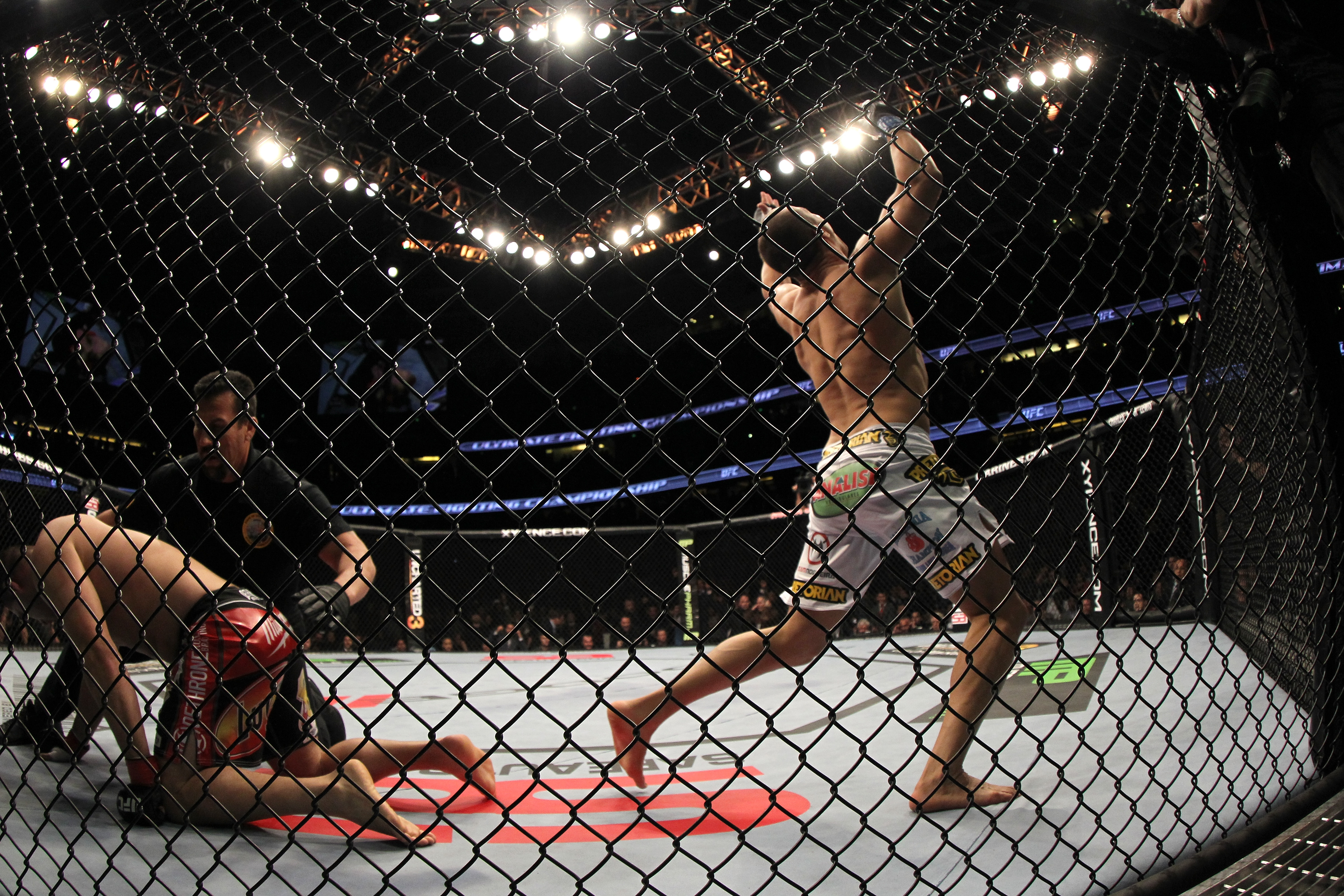 Dan Henderson and Mauricio “Shogun” Rua
These two legends treated the crowd in San Jose to a fantastic five-round battle. The fight kept ending up right in front of me in the corner, so at this moment, I grabbed the cage with my left hand, leaned back and switched to my fisheye lens for a different look. 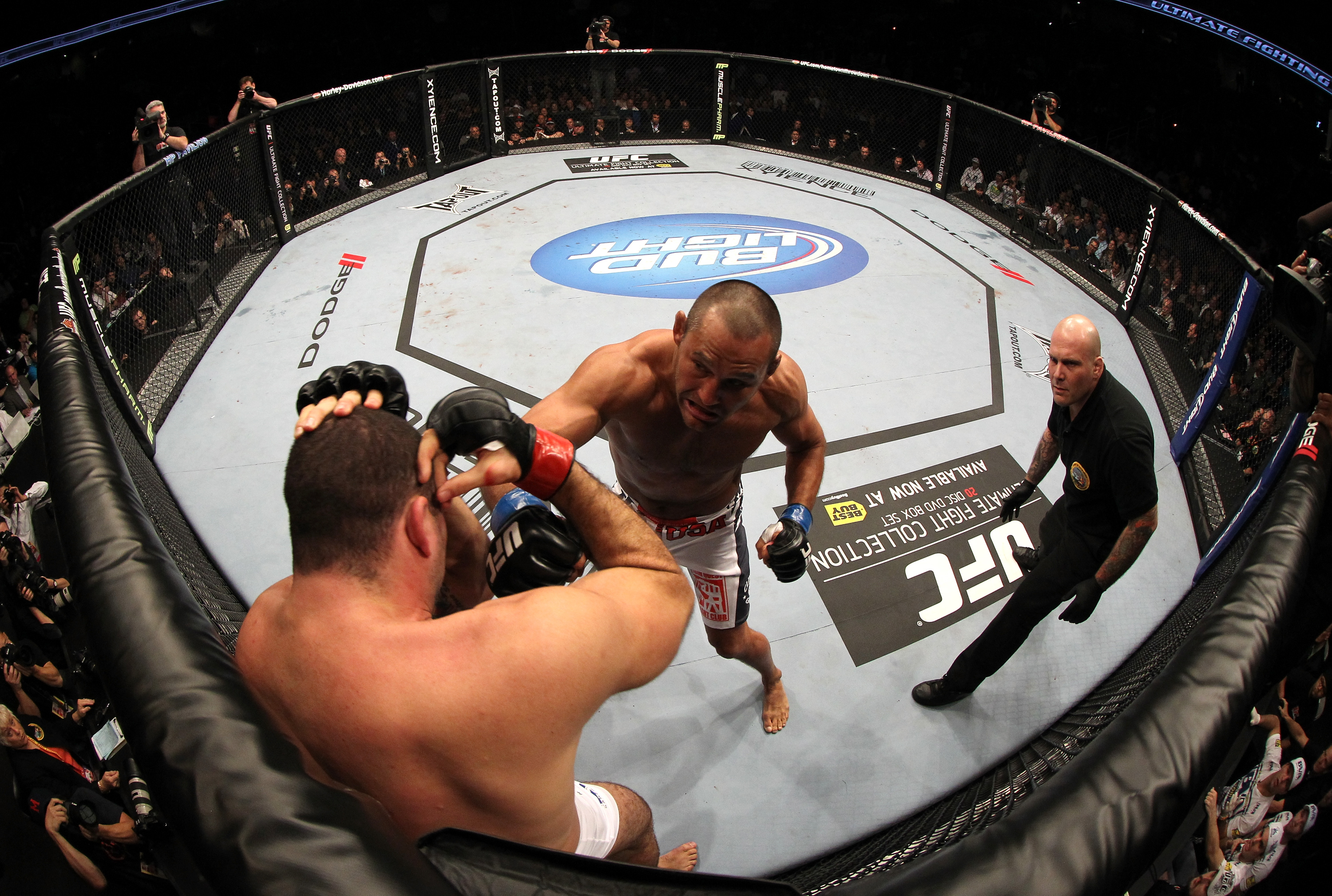 Ronda Rousey
This is from the first women’s bantamweight title bout where Rousey defeated Liz Carmouche with a first-round arm bar submission. I think everyone expected it to be an easy victory, but Carmouche had Rousey in some trouble early and put up a great fight. Once Rousey had the position, she snatched the arm and cranked with all she had. This is an example of when the angle doesn’t quite work for me. The next frame of the arm extended was completely wasted as you couldn’t see Ronda or the arm at all. This frame still worked well, though. 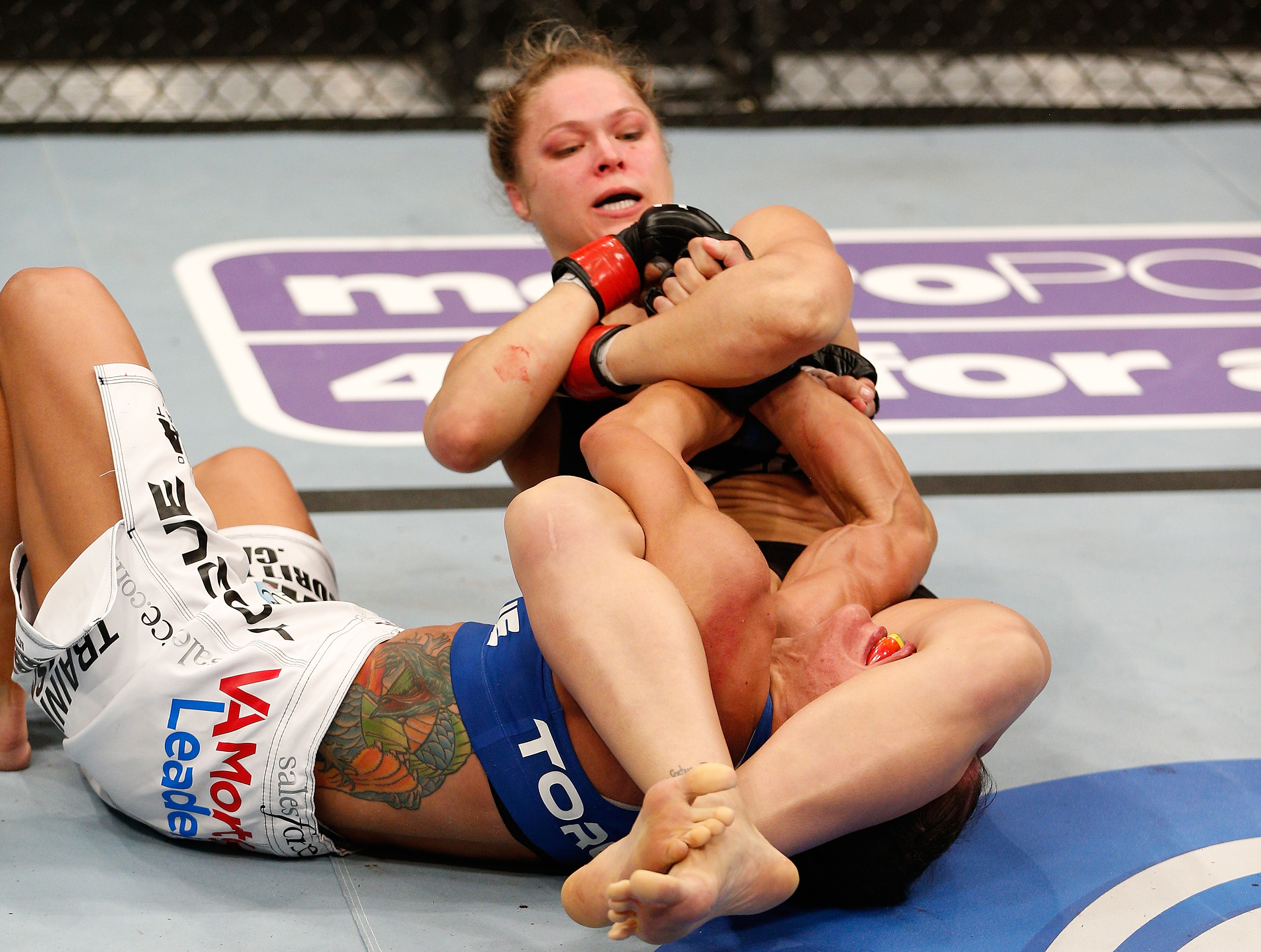 GSP vs Nick Diaz
After a couple years of talk, Nick Diaz would finally face Georges St-Pierre, in Montreal. The crowd was electric. The fight was very fun to shoot and to take in as a fan of both guys. Hopefully someday, we will be treated to a rematch between the two. 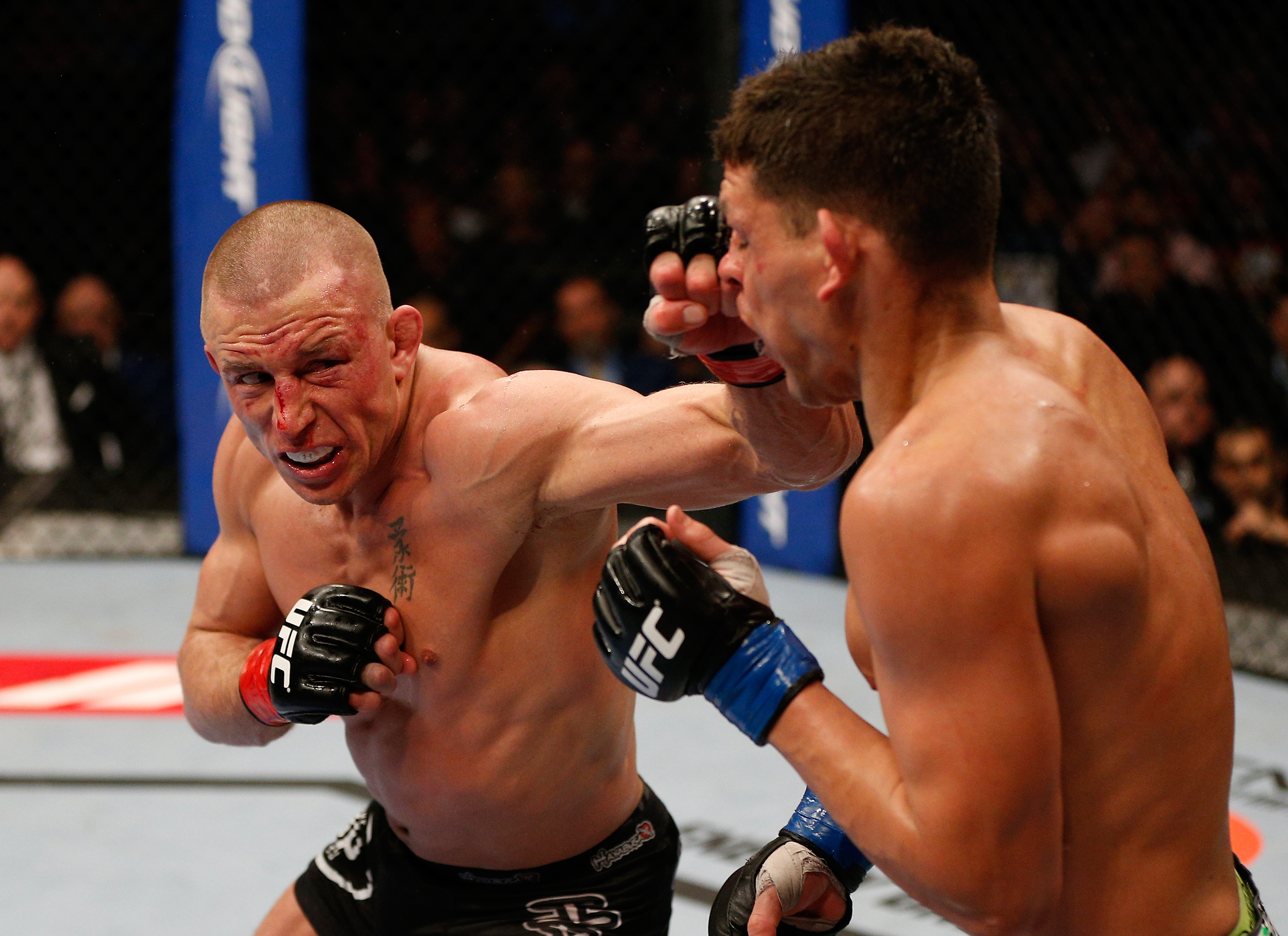 TJ Dillashaw
This is the moment of victory for TJ Dillashaw as he celebrates after knocking out Renan Barao to capture the bantamweight title. This is one of my favorite remote camera images I’ve ever captured. The emotion of TJ’s victory as he stands over Barao, who isn’t sure where he is in that moment, was inspiring. A rare clean frame of this scene as the officials and doctors are usually very quick to storm the Octagon after a fight ends. 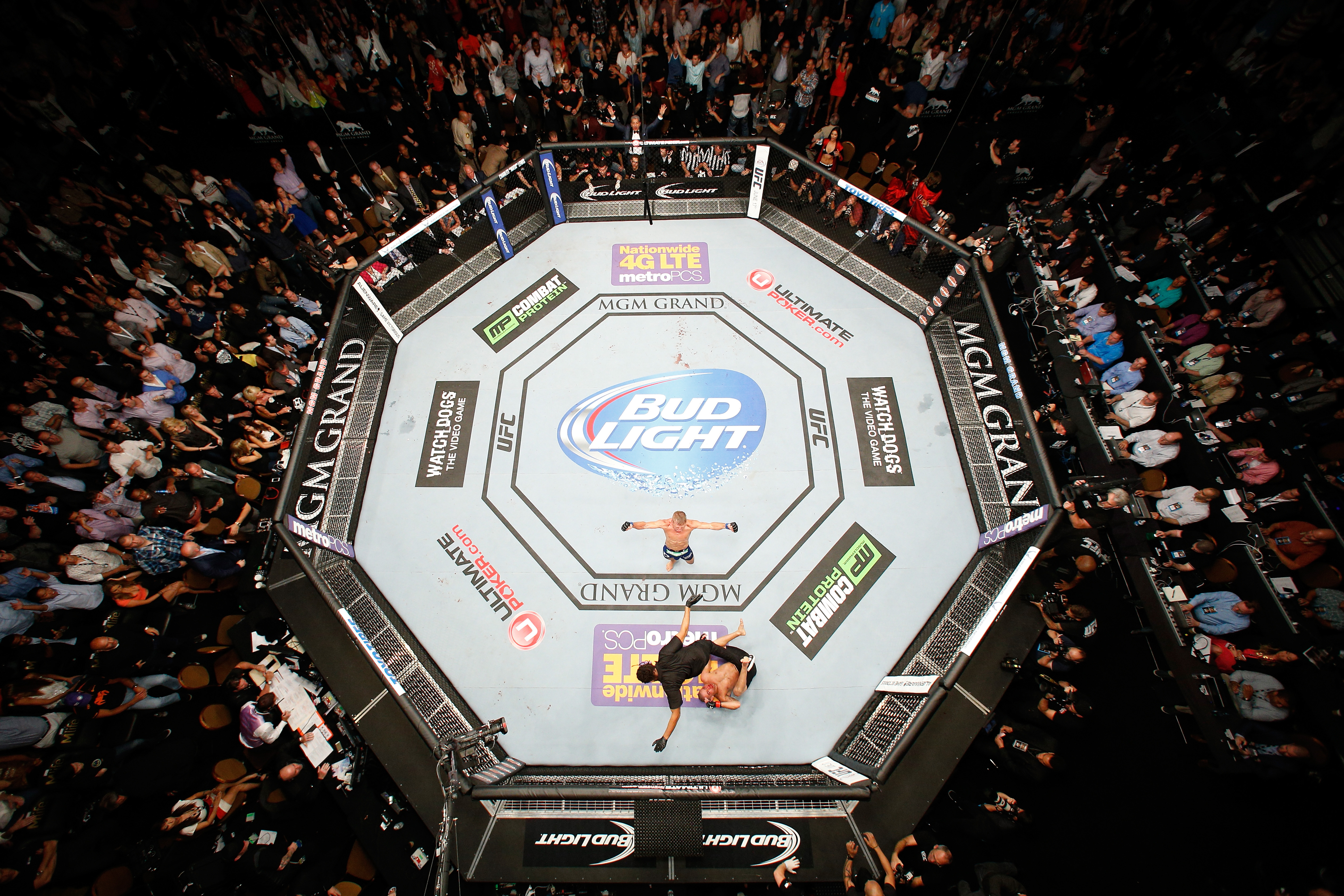 Robbie Lawler
"Ruthless" captures the UFC welterweight title by defeating Johny Hendricks in their rematch. Having seen Robbie develop from his debut in 2002, through his trials and tribulations, to his rise back to the top; this moment struck a chord with me. Robbie is someone I always point to when trying to explain how hard work pays off. 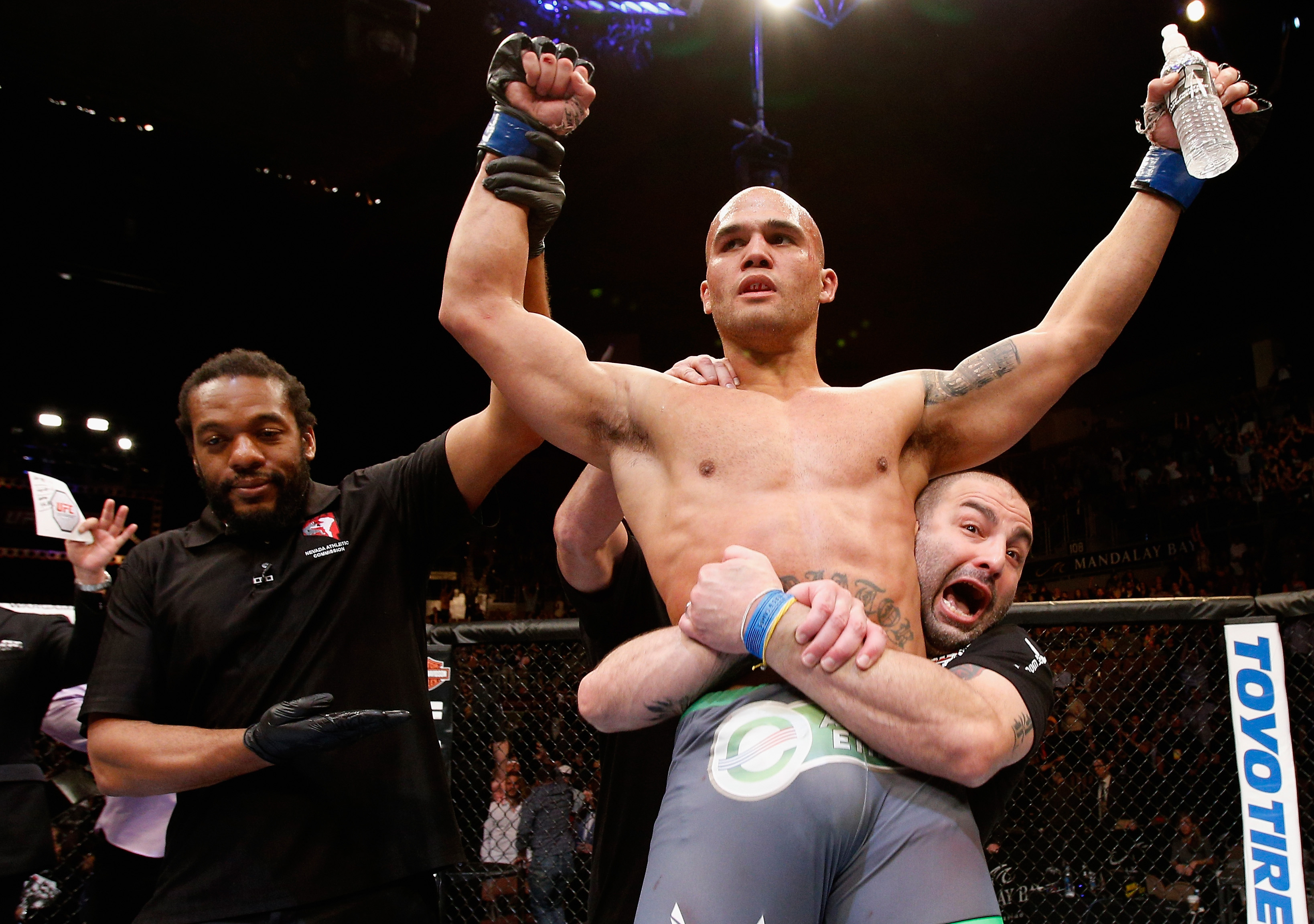 Conor McGregor
"The Notorious" stands on the scale in front of the largest weigh-in crowd I’ve ever seen inside the MGM Grand Garden Arena the day before his bout against Chad Mendes at UFC 189. This was a remote camera rigged in the truss about 15 feet above the stage. I had no idea the low fill lights would be there when we hung and focused the camera, but that’s one of my favorite parts of the image. How it sets him off from the background. 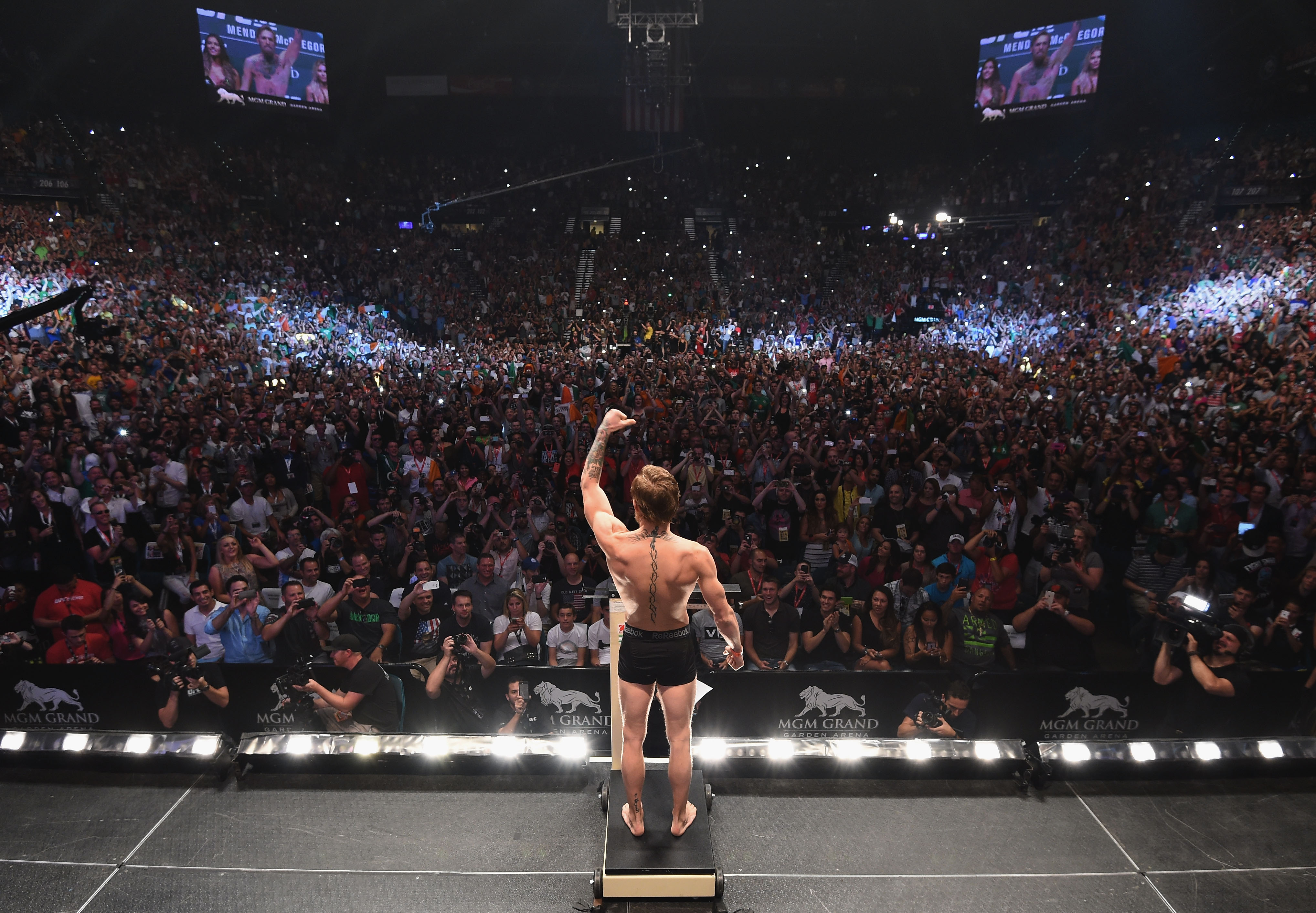 Conor McGregor
After all his talking, McGregor delivers on his guarantee and defeats Chad Mendes to capture the interim featherweight title. The energy in the building was like nothing I’ve seen before. It felt like the whole country of Ireland was there in attendance. 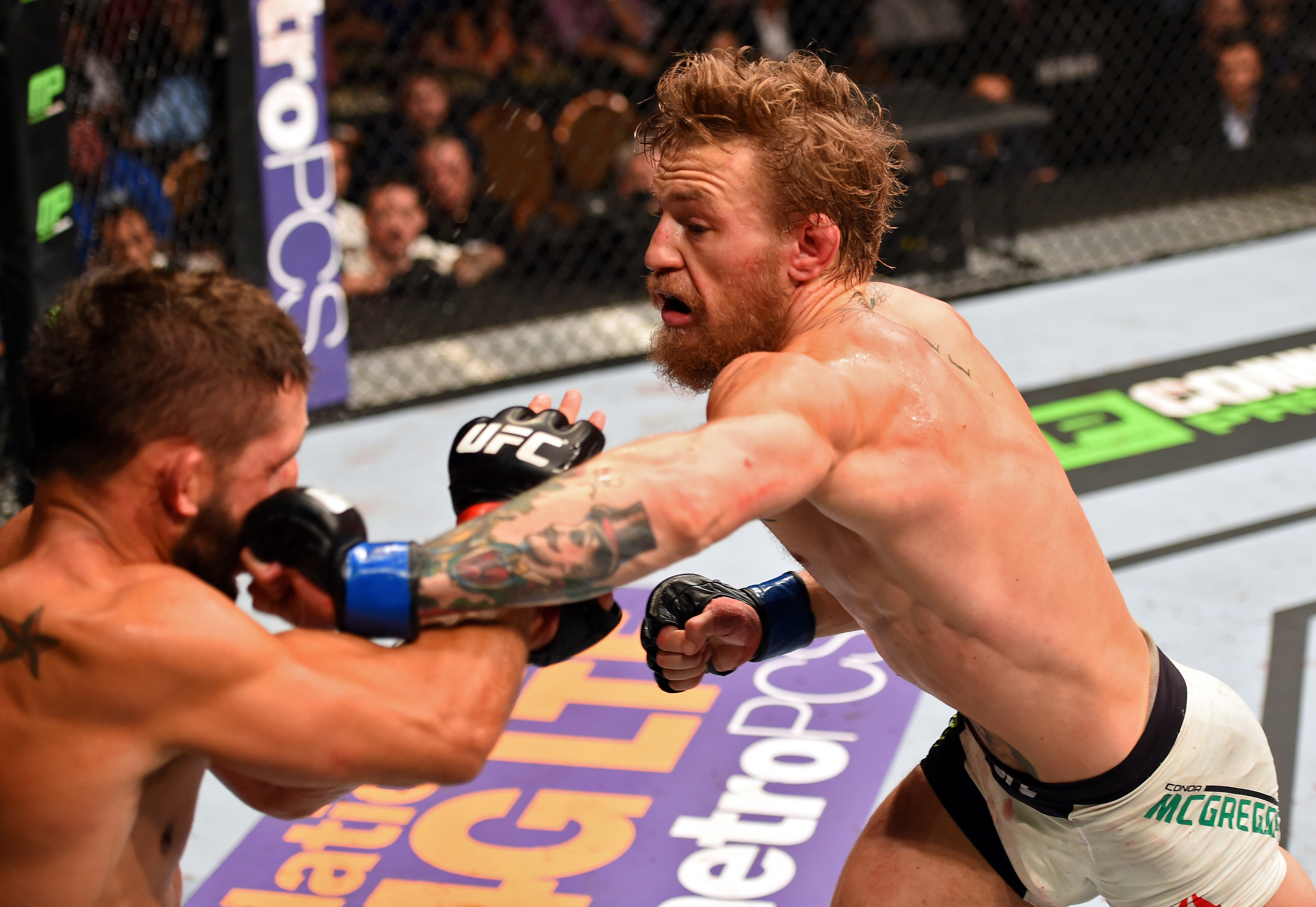 Holly Holm
"The Preacher's Daughter" shocked the world with her incredible knockout of Ronda Rousey in front of 50,000-plus fans at Etihad Stadium in Melbourne, Australia. This is another great example of everything working in your favor with a remote camera. After struggling for three days setting up and troubleshooting the camera and networking gear, the finish couldn’t have been more perfect. The camera is pointed at almost dead center in the Octagon completely clean with no obstructions. One of my favorite sequences I’ve ever captured. 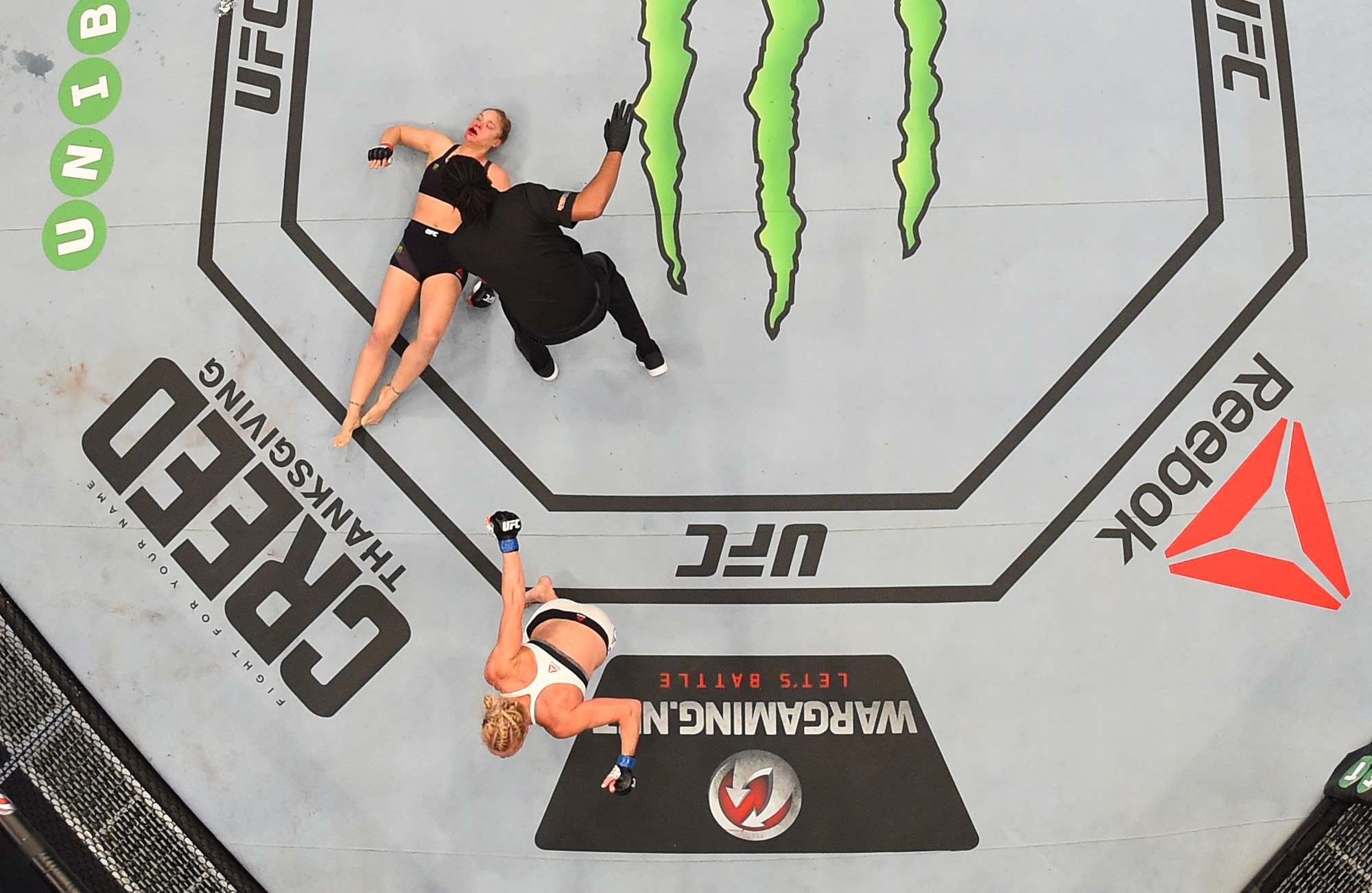 Luke Rockhold
Not the cleanest image, but still one of my favorites as you see the elation on Luke Rockhold and dejection of Chris Weidman after Rockhold defeated Weidman to capture the middleweight title at UFC 194. 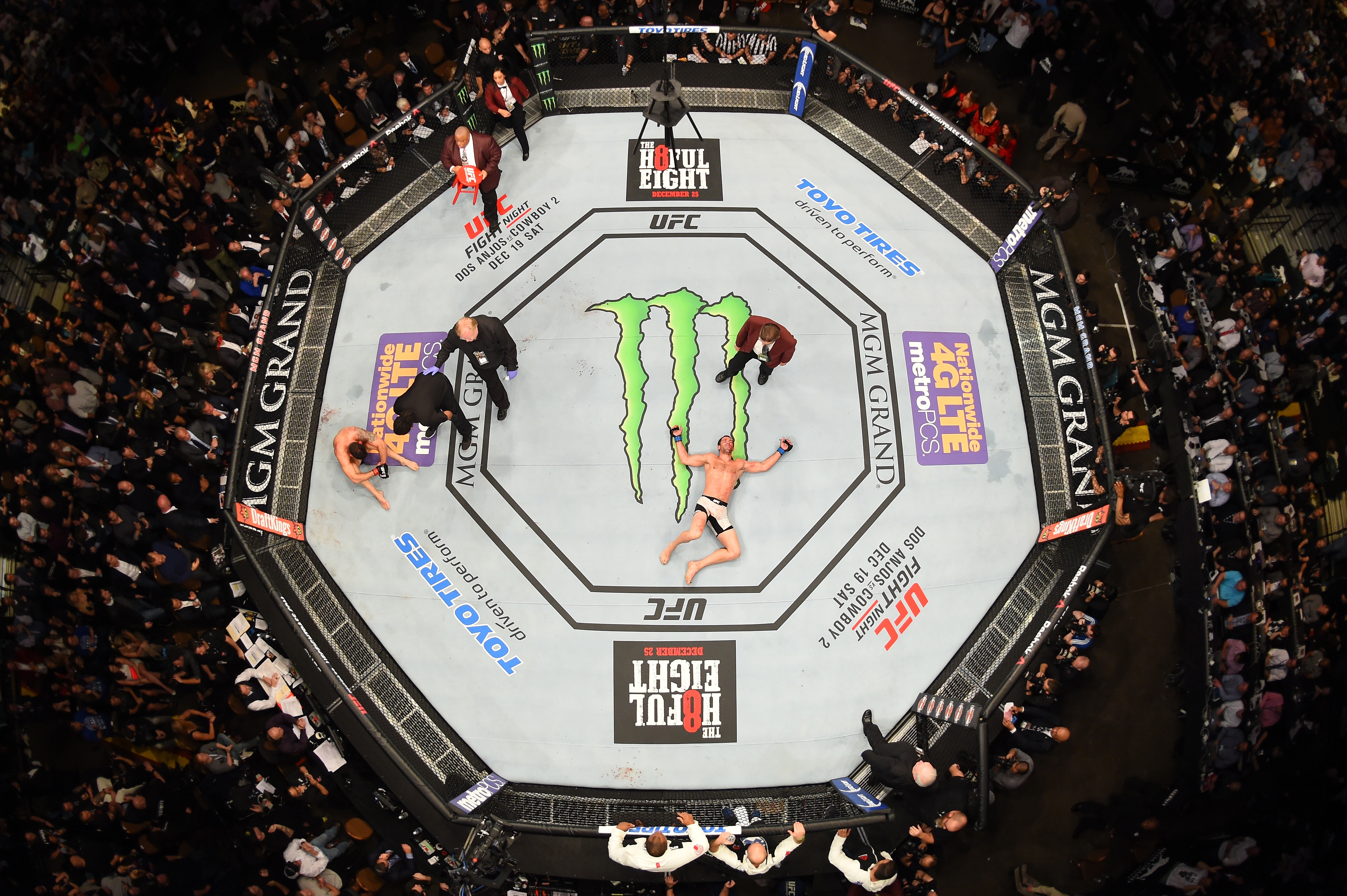 Miesha Tate
Tate stages a comeback for the ages and chokes out Holly Holm to take the women’s bantamweight title at UFC 196. Tate was down on all cards going into the fifth round. In a perfect world, the finish would have been closer to me and a little better angle, but I’m still very happy with the way this image turned out. This is the moment before they rolled away from me and the referee stopped the fight. The emotion in both their faces says all you need to know about this photo. 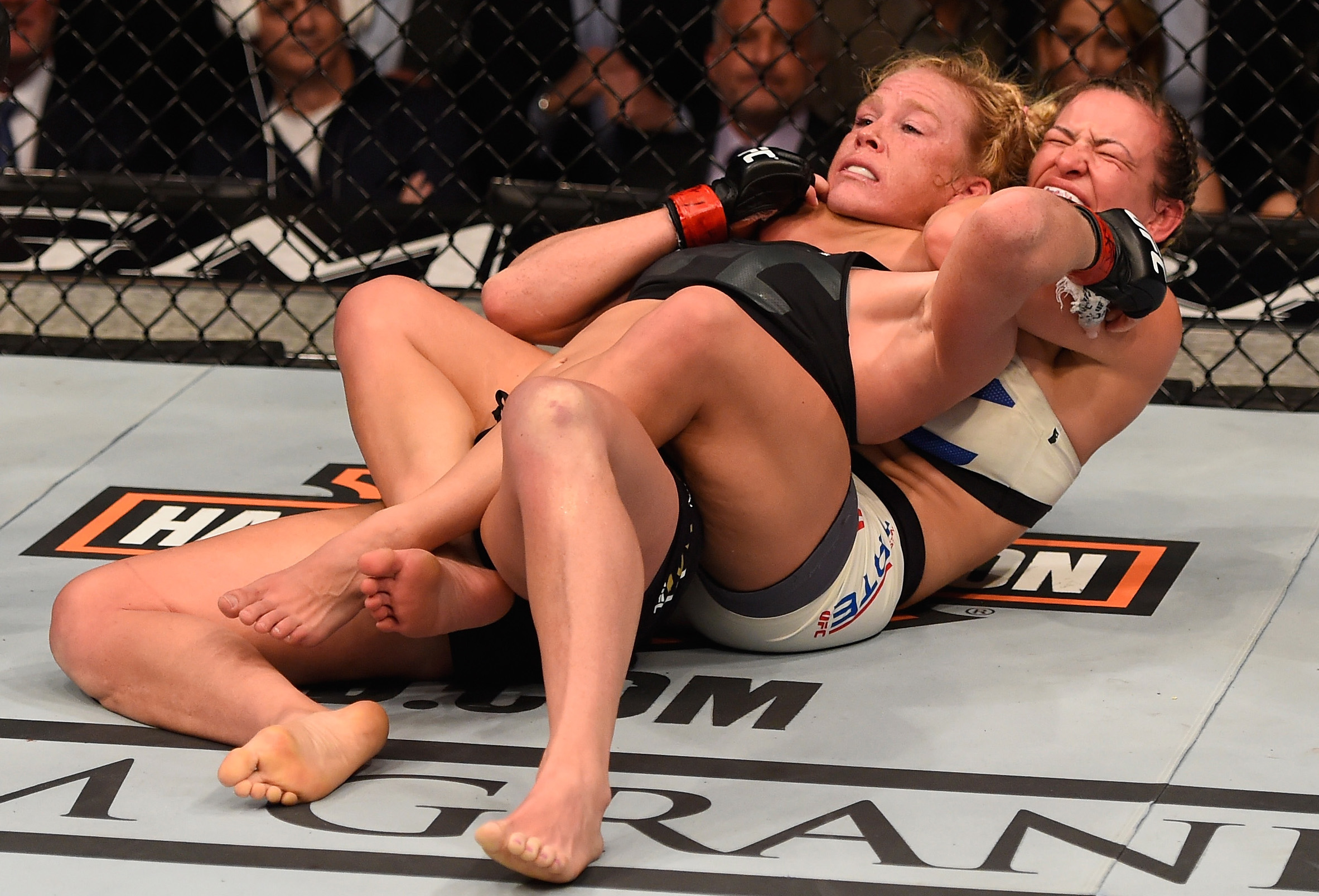 Nate Diaz
Diaz reacts after his submission victory over Conor McGregor at UFC 196. Nate walked straight towards me shouting in excitement and posing. I just kept composing and firing as he got closer and closer. I owe a huge credit to our editors for getting this image out within seconds of capture. It was picked up by so many outlets that night. 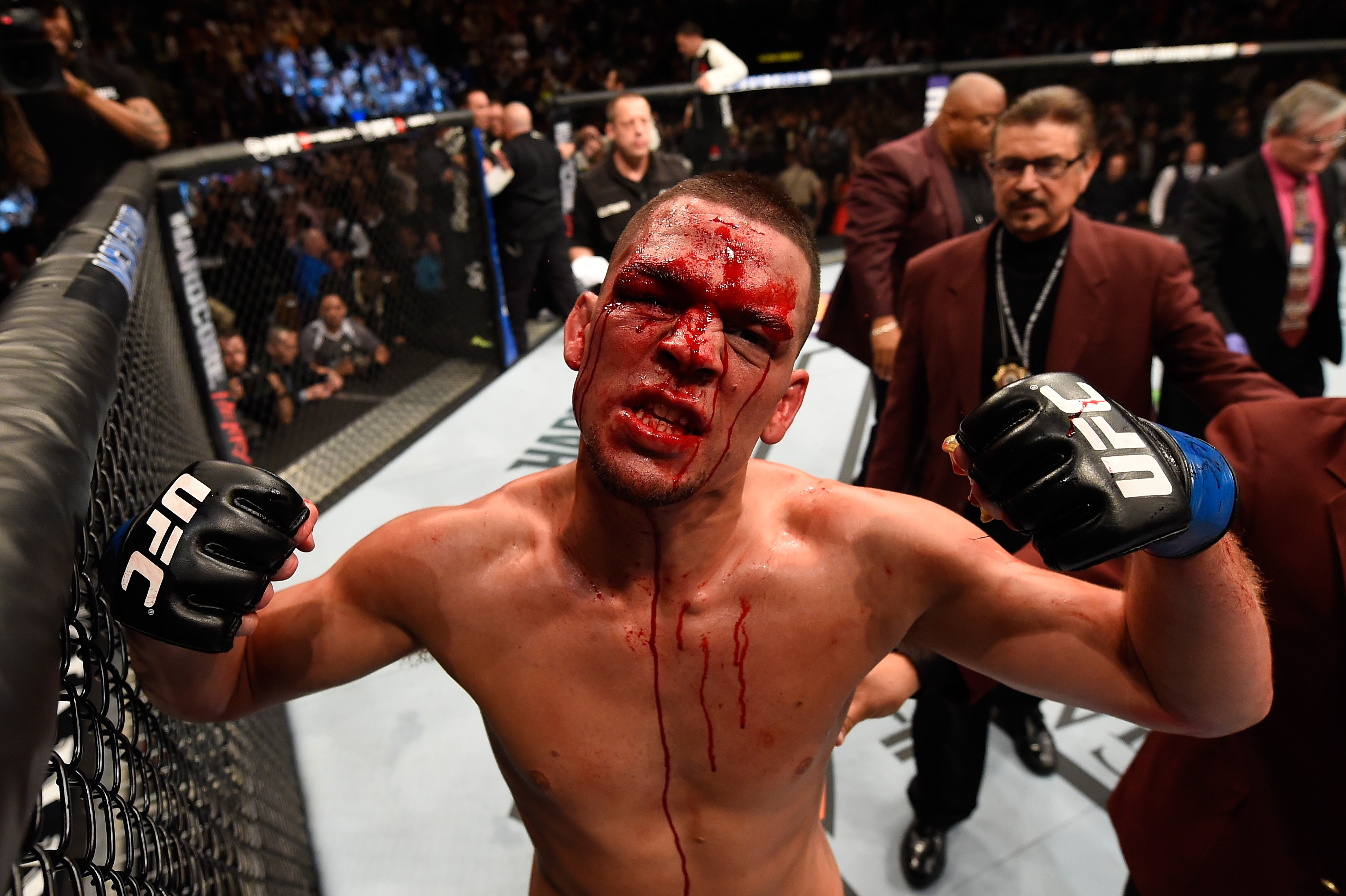