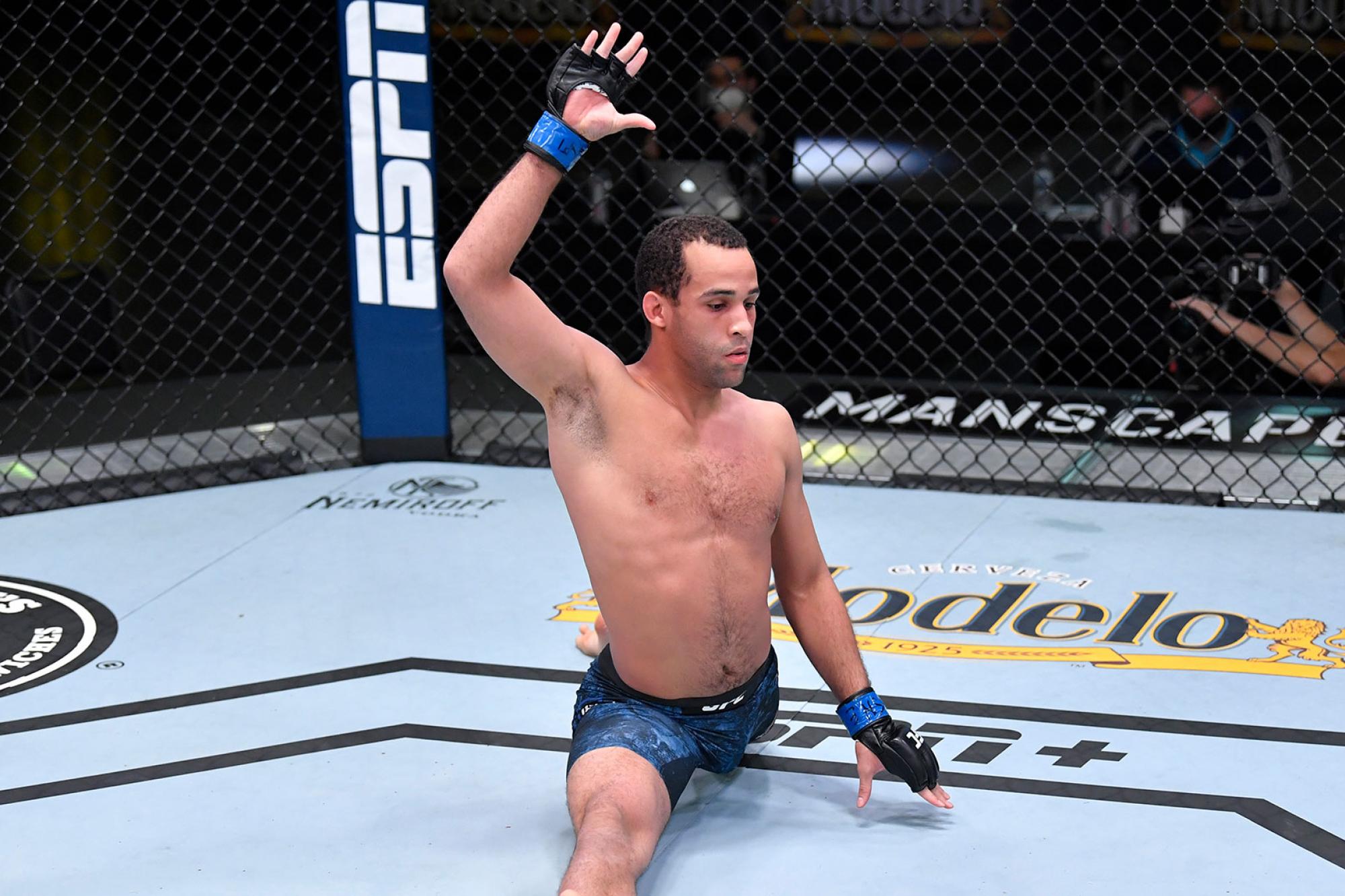 Jordan Leavitt: Staying True To Himself

Jordan Leavitt's 20 Second Slam KO Put Him On The Map, Now He's Ready For The Next Chapter At UFC Fight Night: Rozenstruik Vs Sakai
By THOMAS GERBASI, ON TWITTER: @TGERBASI • Jun. 4, 2021

Twenty-two seconds. That’s all it took for Jordan Leavitt to realize his dream of a UFC win.

“That was actually super anti-climactic for me,” Leavitt laughs when referring back to his knockout of Matt Wiman last December. “So I've never knocked anybody out, first off, so that was a surprise; mostly an event of circumstance. I could have never planned it to go that way. And for the past ten years I've been wanting to make my UFC debut and I'm visualizing my fight beforehand, and then it was over super quickly. It didn't hit me until after the press conference – ‘Oh my God, that was my dream. I gotta think of a new dream.’ It hit me like a truck when I got home.”

Most would be happy with getting out of a fight in less than 30 seconds and earning a Performance of the Night bonus in the process, especially with a baby on the way. And Leavitt was happy with his success in his hometown of Las Vegas a few weeks before Christmas. But for folks like the 26-year-old, thinking like most people wouldn’t have even gotten him to this place in his career in just eight pro fights.

Watch Saturday With Your ESPN+ Subscription

So Leavitt will continue to think outside the box. Take the generic question of his plans for 2021, beginning with Saturday’s UFC Fight Night opener against Claudio Puelles, and the response will be one I’ll bet you’ve never heard.

“I want to get three fights, three first-round finishes and then I'm looking for a loss,” he said, starting typically and ending anything but that. “I feel like my entire fight career, I watched all these young guys and they took super easy fights, and they're like, 'Oh, I'm 9-0,' but they didn't grow as an individual, they didn't grow as a fighter, they didn't improve themselves. I only fought two people with losses on their record and I feel like I've done so well and I've got to grow as fast as I have, so I'm out there looking for a loss. Winning is awesome and winning is double the paycheck and it's all those positive things. But one of the things I really enjoy about MMA is the fact that I can prove to myself and to other people that I'm better and I'm improving and I'm learning new skills. It sounds weird, but I want to have that loss, I want to have that struggle because I haven't had it yet. 2021, I would love to get some easy wins, but more than anything, I think I'm really looking for that hard fight. I want to prove myself to myself.” 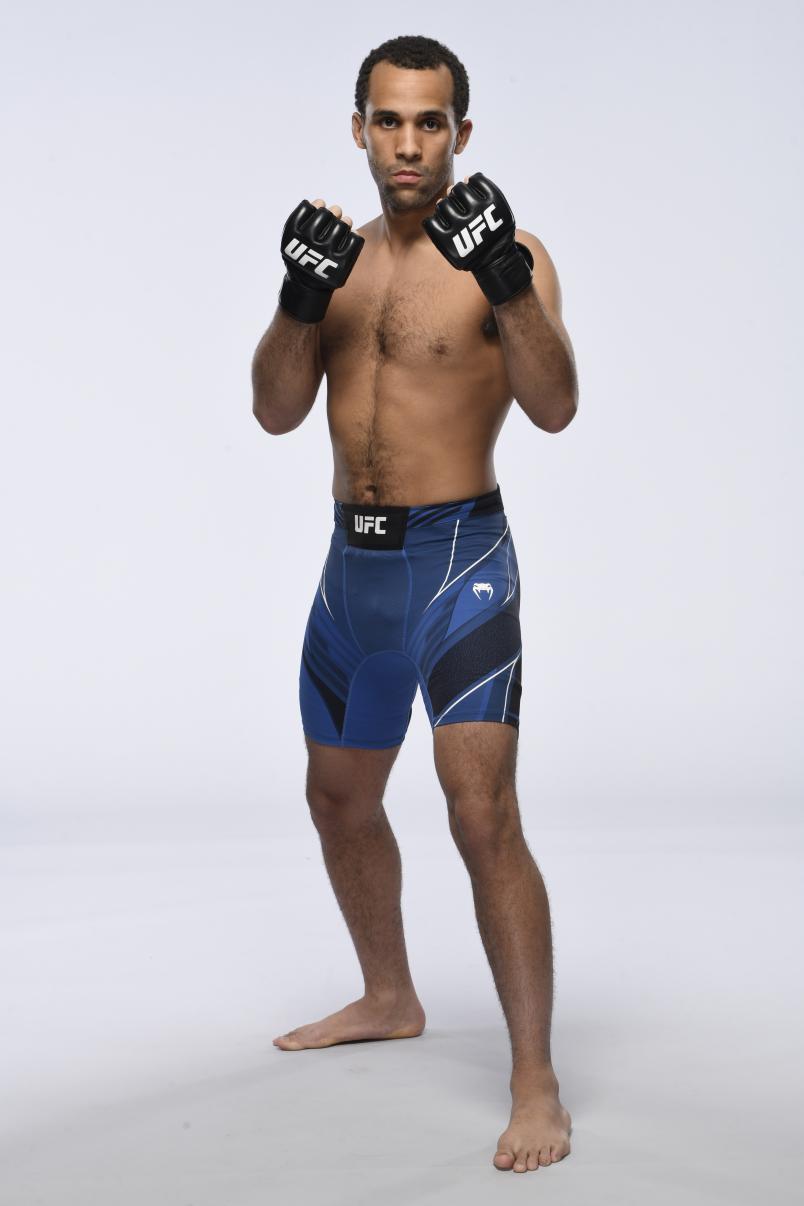 Jordan Leavitt poses for a portrait during a UFC photo session on June 2, 2021 in Las Vegas, Nevada. (Photo by Mike Roach/Zuffa LLC)

It makes all the sense in the world. Well, maybe not the losing part, but the idea of getting into a fight with someone who you can’t knock out or submit in 30 seconds; one who will be there with more experience and more grit than you’ve ever encountered and one who will take you to the dark places most fighters say they’ll go to but won’t want to. Leavitt, 26, hasn’t been pushed to those limits yet, but he wants to see if he can swim in deep waters in a lightweight division that specializes in such tests of the spirit.

That may be why Leavitt remains one of the most intriguing fighters in the sport, and maybe why his wife, Ashlie, believed in him from the start.

“I was so blessed to have someone like my wife,” said Leavitt. “Dating sucks, but I met the one person who I told I was a fighter, and she didn't think it was cool. (Laughs) That was a negative in the column for her. She doesn't like sports, never even heard of Mike Tyson or Floyd Mayweather. I had to tell her, ‘I do this,’ and she's like, 'Oh, is it serious?' And she just took my word for it. She said if you think it's important and you think you've got it, I'll support you. And it was so matter-of-factly. She said, ‘Up until we have kids, we'll have to make sure I can work and then you can work part-time, and you'll figure it out.’ And that was that.”

The two married in 2019, while the dream Leavitt had since he was a teenager continued in his adult years. And since turning pro in 2017, he’s gone 8-0 with six finishes, including a first-round submission of Jose Flores last August that earned him a UFC contract. And in the post-fight interview, he announced that the Leavitt family would be having a new addition, with Miss Josephine arriving in January. It’s been an interesting 12 months.

“It’s easier than I thought,” said Leavitt, drawing a laugh from this humble scribe who is the father of a 25-year-old. “I think since I've never been a good sleeper, I was better prepared than most.”

Okay, he’s talking about middle of the night feedings. As for the rest of fatherhood, Leavitt says, “I wouldn't say it changes the way I approach things because I've always been preparing to be a father. But it's definitely given me a lot more urgency in how I approach things. I do things with a little bit more haste, especially now that I'm fighting not just for me and my wife, but for my daughter.”

And what Josephine will learn from dad is that being yourself is the most important thing no matter what she does. It took Leavitt a little while to learn that, but once he did, he hasn’t looked back and hasn’t worried one iota about what people think about him or what he does.

“When I was younger, I was super shy and didn't have a lot of friends,” he said. “I was always crippled by anxiety, about whether or not people liked me, and I was just unhappy until probably my senior year in high school. Then I came to the realization that as long as I'm happy with myself, it doesn't matter if anyone else is happy with me. I have people who love me. I don't need any more people around me to be my friends or my fans. I just reached a point in my life where I was satisfied with the love I had in my life. If you're worried about what people think and worried about them liking you, you're never gonna act the way you want.” 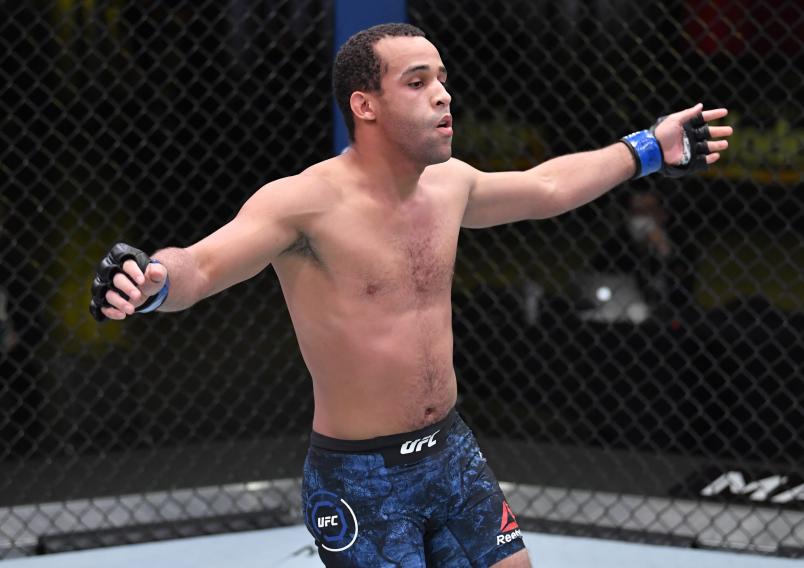 Jordan Leavitt reacts after his knockout victory over Matt Wiman in a lightweight bout during the UFC Fight Night event at UFC APEX on December 05, 2020 in Las Vegas, Nevada. (Photo by Chris Unger/Zuffa LLC)

So you may think the book reading, split-performing Leavitt is a little quirky, but that’s okay, because the last thing you can call him is generic. And somewhere, some kid is feeling left out of the “cool” group and they may just tune into the fights on Saturday night and see someone who has no concerns about fitting in. Of course, that comes with its roadblocks, but right about now, the “Monkey King” bandwagon is filling up, with his family having fight watch parties and even his grandma dropping his name before a recent surgery to a UFC fan working at the hospital.

“It took some time but I'm thankful for them being proud now,” said Leavitt, who is ready for part two of his UFC journey to take place. As for parts two, three, four and beyond, he’s got plans. Of course, he does.

“Right now, it's to get some bonuses and buy my wife a house,” said Leavitt. “And then we'll have to see. I'm a fan of baby steps, but definitely a house. My wife took a big gamble on me, and it paid off a lot sooner than we could have anticipated. She said, ‘I'll work so that you can train and follow your dream.’ And then I got my dream much sooner than we thought. And I have promises to keep. So I'm gonna take care of her and give her everything we need and take it from there.”