Maia back to Vancouver in bid for title shot 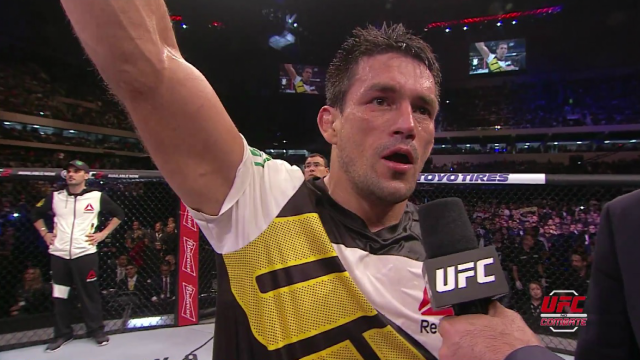 The last time Demian Maia had four-ounce gloves on in Vancouver back in June of 2011, it was not a night to remember, as the Sao Paulo native lost a three-round unanimous decision to Mark Munoz.

At the time, Maia was 14 months removed from his title fight loss to Anderson Silva, and he would still fight twice more at 185 pounds before moving to the welterweight division. But before he became one of the top 170-pounders in the world and the headliner of this Saturday’s card in British Columbia against Carlos Condit, he had growing to do. So it’s not surprising that the eternally optimistic Maia found the positives in the loss to Munoz.

“In the end, things happen for a reason, and your development as a fighter and as a person is a consequence of all the experiences and situations you had put yourself through, and mostly what you take from those experiences,” he said. “I had a phase when I was dedicating myself much more to striking than grappling, and that fight was during that period.”

By the time Maia made his jump to welterweight in 2012, he had started to bring his world-class ground game back into the mix, and some assumed that this development was an unspoken admission that the reliance on striking was a mistake, but it was far from that.

More on Fight Night Vancouver: Reasons to watch on Saturday | Vancouver Cheat Sheet | Fighters on the rise this weekend | Free fight: Maia vs Rick Story | Be there! Tickets still available

“I think it was necessary,” he said. “I had to be more comfortable with striking so I could continue to evolve, and if I hadn`t gone through that phase and had those experiences in those fights, I probably wouldn`t be doing what I had done recently. It was all a process, and a development that kept me moving to different directions and approaches.”

The proof is right there on the 38-year-old’s record. Since back-to-back defeats to Jake Shields and Rory MacDonald in 2013-14, Maia has won five straight, and he has looked downright dazzling in his last three victories over Neil Magny, Gunnar Nelson and Matt Brown. This stretch has moved Maia into the top five in the 170-pound rankings, and he has to feel close to a shot at the belt.

Maia has been respectful, but not shy, about expressing his thoughts on the whole title picture. He understands that selling a fight is important, but not at the expense of deserving contenders having to wait too long.

“There has to be a balance where both things can go together, which I think will make the sport more solid and profitable long term,” he said.

But what if he beats Condit and gets that call he’s been waiting for? Is new champion Tyron Woodley a more favorable matchup for him than former champ Robbie Lawler? Or does it even matter?

“I don`t really see any matchups as favorable, or as impossible,” Maia said. “They can be favorable or tougher in theory, but in the end I think you either make them favorable or super tough, depending on how you prepare, how hard you train, the strategy you put together, and if you are able to implement your game plan well on fight night or not. Everybody in the top 15 is very tough, and your opponent is always working hard as well, and preparing a game plan to beat you. I try to focus my energy on the task ahead, a fight at a time, and not lose focus on my next opponent. Right now I have a very tough fight ahead in Carlos Condit, and thinking about Woodley or anyone else before that, is useless and a trap.”

If Maia isn’t the most mature and level-headed fighter in all of combat sports, he’s got to be in the top ten. But as such a serious and focused man, is he able to enjoy any of his run here in the UFC? He laughs, making it clear that he most certainly is.

“I love what I do,” he said. “I love fighting and martial arts. I still enjoy training a lot, going there and competing, and my dream is still to be UFC champion one day. I have a lot of pride to represent Brazilian Jiu-Jitsu, I still enjoy teaching it whenever I can, and I think being an example for the kids is something that also inspires me a lot, especially now that I have my own kids and can understand even more the meaning of it. Martial arts has been my life for a long time now, and I know it`ll be forever. There'll be a time where I won`t be able to fight professionally anymore, as unfortunately we all grow old, but as long as I still enjoy training and feel like I`m still improving as a martial artist, I`ll continue to drive forward, and right now I`m still enjoying it a lot.”