UFC heavyweight Stefan “Skyscraper” Struve (29-5-0) looks to extend his four-fight winning streak on Saturday when he takes on Mark “Super Samoan” Hunt (8-7-0) at UFC on FUEL TV 8. The seven-foot Dutchman will look to use his Stretch Armstrong-esque reach and formidable submission skills to knock Hunt — a former a former K-1 kickboxing champion— from the title, uh, hunt.

“I always want to show how much I’ve improved, how much better I’ve gotten,” Struve said. “I’ve added about 15 pounds of muscle since my last fight, and I’ve never felt stronger.”

Of course a weight gain that significant wasn’t accidental or the product of a diet based on Funyons and Skittles. It came from being as strict in the kitchen as well as the gym.

“I have about seven meals and two protein shakes per day,” he added. “I eat a lot of clean meats, vegetables, good carbs, and [minimally processed] foods. When the fight is over, I will have a snack, like pizza or a hamburger, but until then I’ll follow this meal plan as closely as possible.”

For portions, Struve consumes 300 grams of chicken or fish, and 500 grams of vegetables. Vitargo, a supplement he adds to his protein shakes, is a quick-digesting carb that the body can use to restore muscle glycogen and aid protein synthesis.

Here, a typical day's diet for the 25-year-old athlete:

MEAL #1 | 8:30 a.m.
High-protein yogurt, cottage cheese, chicken, eggs, fish oil, multivitamins, and extra vitamin C
Struve says: “Cottage cheese has a lot of protein … that the body will consume through the night. In Holland, the cottage cheese is more like yogurt; it just tastes saltier.”

MEAL #2 | 9:30 a.m
Oatmeal with non-fat milk
Struve says: “With the first meal of the day having high protein and the second being oatmeal (carbs), I have everything I need to perform the way I need to.” 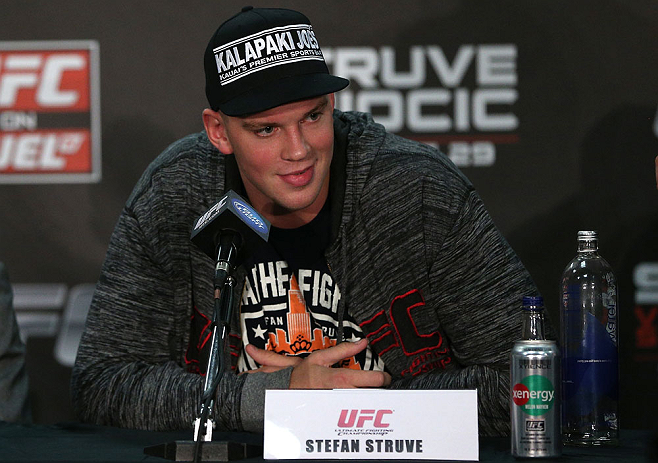 Struve says: "My shakes are consumed 10-15 minutes after training so my bloodstream is still going fast and my heart rate is up; this allows my body to absorb the nutrients more easily."

MEAL #4 | 3:00 p.m.
Chicken or fish or meat with vegetables
Struve says: "Chicken with tomatoes is an easy meal to make and there’s a lot of nutrition in there. I prefer green vegetables, but will get whatever looks good in the supermarket.”

MEAL #6 | 9 p.m. – 9:30 p.m
Fruit and coconut water
Struve says: "After my training session, I'll eat a banana, apple, grapes, or whatever is available at the market. I’ll also have coconut water to [re]hydrate my body."

MEAL #7 | 10:00 p.m. +/-
Cottage cheese with fish oil and vitamins
Struve says: “There are a lot of dairy farms in Holland, so cottage cheese is more affordable than it is in the U.S.”