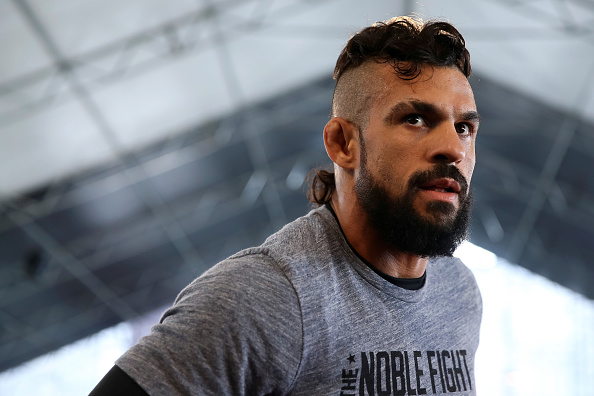 On May 12, Vitor Belfort will step into the Octagon for the final time to face Lyoto Machida at UFC 224 in Rio de Janeiro. It’s one more opportunity to see one of the greats of the sport add another chapter to a legacy that you can read about below.

Tra Telligman – February 7, 1997 – UFC 12
Result – Belfort TKO 1 (Watch on UFC FIGHT PASS)
Few, if any, knew about Brazil’s Vitor Belfort when the fresh-faced 19-year old made his UFC debut against the Lions Den’s Tra Telligman at UFC 12. 77 seconds after the opening bell though, people couldn’t stop talking about his fast hands and fight-altering power. Belfort would win another bout later that night, in 43 seconds over Scott Ferrozzo, and when he destroyed Tank Abbott in less than a minute three months later at UFC 13, the legend of “The Phenom” was born.

Randy Couture I – October 17, 1997 – UFC 15
Result – Couture TKO 1 (Watch on UFC FIGHT PASS)
Entering this bout at UFC 15 in Bay St. Louis, Mississippi, Randy Couture was a virtual unknown in MMA, with two UFC wins under his belt and an impressive resume as a world-class wrestler. Belfort was another story completely. The 20-year-old wunderkind had three UFC victories under his belt, with each of his wins being frenetic displays of Tyson-esque speed and power. No one expected Belfort to lose anytime soon, let alone to the soft-spoken 34-year-old. Couture threw a wrench in the works that night though, stopping Belfort at the 8:16 mark and changing the face of MMA forever.

“I was totally out of focus,” Belfort told me a few years later. “I wasn’t training, I was thinking I was the greatest and that nobody could beat me.”

Wanderlei Silva – October 16, 1998 – UFC Brazil
Result – Belfort TKO 1 (Watch on UFC FIGHT PASS)
With countrymen Belfort and Wanderlei “The Axe Murderer” Silva both possessing the ability to end a fight in an instant, you just knew that their fight at Ultimate Brazil was going to end explosively. Well, it did, with the 21-year-old Belfort stopping his local rival with a dazzling array of strikes that sent the Sao Paulo crowd into a frenzy. Silva, just two years into his career at the time, would soon go on to greatness in Japan. For Belfort, 6-1 at the time, it was to be his last UFC bout for three years, as he proceeded to sign a deal with PRIDE in Japan that saw him win four of five fights from 1999 to 2001, with his only loss coming to Kazushi Sakuraba.

Chuck Liddell – June 22, 2002 – UFC 37
Result – Liddell W3 (Watch on UFC FIGHT PASS)
After four straight wins in Japan over Gilbert Yvel, Daijiro Matsui, Bobby Southworth, and Heath Herring, Belfort was scheduled to return to the UFC to face light heavyweight champion Tito Ortiz on September 28, 2001’s UFC 33 card in Las Vegas. It was the UFC’s first event in Nevada, and the first since the organization got back on pay-per-view cable TV. But it was not to be, as Belfort pulled out of the fight due to injury. Nine months later, Belfort was finally back in action, this time on free cable television via Fox Sports Net against Chuck Liddell, and instead of dazzling the new fans of the UFC, it was “The Iceman” who made his first major move towards superstardom with a three round decision win punctuated by an oft-replayed knockdown of Belfort late in the fight.

Randy Couture II – January 31, 2004 – UFC 46
Result – Belfort TKO 1 (Watch on UFC FIGHT PASS)
After getting back in the UFC win column with an impressive TKO of Marvin Eastman at UFC 43, Belfort was granted a rematch with light heavyweight champ Couture, the first man to beat him. And even though Couture was coming off dominating wins over Liddell and Ortiz, he was once again going to be facing a younger, more explosive opponent, making the UFC 46 main event a compelling one.

Adding to the drama was the fact that Belfort’s sister, Priscila, had been kidnapped on January 9th of that year, leaving the recently married Belfort in an understandable state of emotional distress. He soldiered on through training camp though, telling me before the fight, “The only reason I’m here is because God wants me here. He’s given me the strength. If not for that I wouldn’t be here; I’d be very depressed. I’m praying for God to continue to give me the strength until the day of the fight. Then I can go back and hopefully I can have good news of my sister. I’m supposed to go to a honeymoon, but my honeymoon is not going to happen.”

And once the bout commenced, it was over almost as soon as it began.

The two briefly sparred with each other, and then Belfort grazed Couture with a straight left. The two clinched against the fence, with Couture in obvious discomfort. Referee John McCarthy intervened, bringing in ringside physician Margaret Goodman to examine Couture’s left eye, and she recommended that McCarthy call a halt to the bout at the 49-second mark, a stoppage that crowned Belfort the new champion.

The culprit that ended the contest was a gashed lower left eyelid of Couture, a cut caused by a seam on Belfort’s glove, and that required immediate surgery. It was a bittersweet victory for the new champion.

Tito Ortiz – February 5, 2005 – UFC 51
Result – Ortiz W3 (Watch on UFC FIGHT PASS)
Less than seven months after defeating Couture, Belfort was stopped in three rounds by “The Natural” and surrendered his 205-pound belt. His next bout in the UFC would be against the man he was supposed to face in 2001, Tito Ortiz, and the three rounder was worth the wait.

Early in the first round, Ortiz quickly drove Belfort to the fence, but the Brazilian was able to escape and soon followed Ortiz across the Octagon with a quick flurry of strikes that put the former champion on the defensive.

Ortiz weathered the storm though, and locked up with Belfort against the fence, controlling the pace with knees and his superior strength. Referee John McCarthy broke the two at the midway point of the frame, and after the two veterans warily circled each other, Ortiz shot in with punches, only to get countered well by Belfort, who put Ortiz in trouble with strikes to the head. Ortiz quickly looked for a takedown to get out of trouble, and wound up in Belfort’s guard with a bloodied nose for his trouble. In the final minute Ortiz pounded away with forearms to the head, looking to exercise his trademark ground and pound as the horn intervened.

Round two saw Ortiz looking for the takedown again, only to be foiled by Belfort’s sprawl, and later by a guillotine attempt that turned into side control by the Brazilian. Ortiz kept his cool as he tried to work his forearm shivers, but Belfort responded with hard forearms of his own to the head, much to the delight of the crowd. Belfort continued to pound Ortiz as McCarthy watched the action closely, but the game Ortiz refused to give in against “The Phenom.” With 1:30 left in the second round, McCarthy stood up the fight, but Belfort quickly pulled Ortiz back to the mat, which was a poor move as Ortiz gained the upper hand in the final seconds with strikes to the head until round’s end.

Ortiz confidently began the final round with a high kick that was deflected by Belfort, and followed up with another takedown. Working with Belfort pinned against the fence, Ortiz’s ground and pound left the tired Brazilian with little chance of escape, though a standup with under two minutes left gave Belfort a brief reprieve – so brief that Ortiz was again in his face within seconds, pinning him against the fence before yet another takedown just before the bell.

Matt Lindland – January 24, 2009 – Affliction – Day of Reckoning
Result – Belfort KO 1 (Watch on UFC FIGHT PASS)
Discouraged by the loss to Ortiz, Belfort took his show on the road and outside of the UFC, competing for four different organizations over the next four years. But after his 2006 loss to Dan Henderson in PRIDE, the now 30-year old Belfort started to show the maturity and focus he had lacked consistently over the previous years. Three straight wins over Ivan Serati, James Zikic, and Terry Martin followed – two by knockout – and in January of this year he was matched up with former UFC middleweight title challenger Matt Lindland. The end came just 37 seconds into the bout, and Belfort had scored a spectacular knockout over “The Law,” one of his most impressive finishes since his early days in the UFC. But there would be more fireworks to come.

Rich Franklin – September 19, 2009 – UFC 103
Result – Belfort KO 1 (Watch on UFC FIGHT PASS)
In September of 2009, Belfort made his long-awaited return to the Octagon, but he didn’t stay long, earning Knockout of the Night honors for his first round finish of former middleweight champion Rich Franklin. It was the performance all of Belfort’s long-time fans were hoping for, as he showed off the deadly hands that made his name back in the late-90s. Next up – a world title shot. 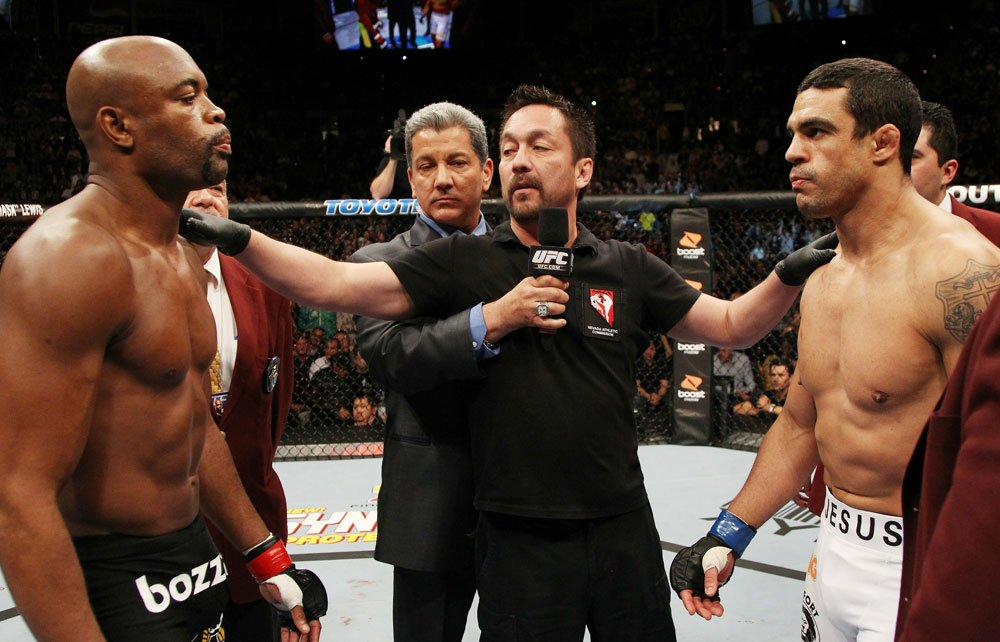 Anderson Silva – February 5, 2011 - UFC 126
Result – Silva KO 1 (Watch on UFC FIGHT PASS)
The highly-anticipated middleweight championship showdown between Belfort and countryman Anderson Silva came to an abrupt end at 3:25 of the first round when Silva landed a front kick to the face that instantly earned a spot on UFC highlight reels for eternity. Left to deal with the aftermath of the devastating defeat was Belfort, who, like he had many times before, would rise again.

Michael Bisping – January 19, 2013 - UFC on FX
Result – Belfort TKO 2 (Watch on UFC FIGHT PASS)
Following his loss to Silva, Belfort was seemingly reborn, using impressive first round finishes over Yoshihiro Akiyama and Anthony Johnson to re-establish his place in the division immediately. And while his next foe after the Johnson fight was expected to be Alan Belcher at UFC 153 in October of 2012, Belfort got an offer he couldn’t refuse for September 22 – an opportunity to regain his light heavyweight title from the most talked about fighter in the game: Jon Jones. It was a risky move, but when Belfort locked on an armbar in the first round, he was moments away from a stunning upset win. Jones would escape and submit Belfort in the fourth round, while the Brazilian returned to 185 pounds in January of 2013, delivering another fantastic finish when he knocked out future champ Michael Bisping in the second round.