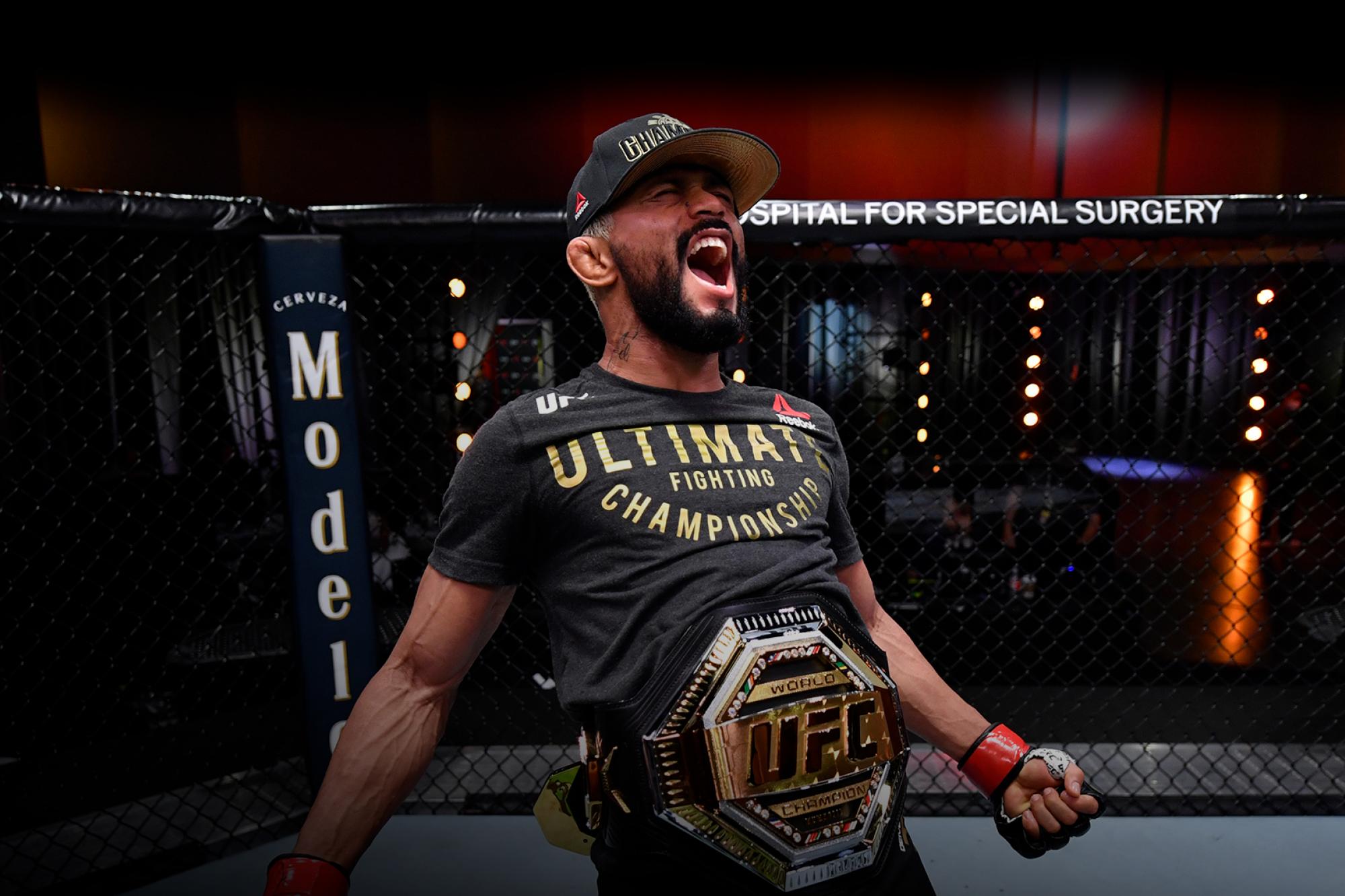 As We Inch Closer To The Epic Rematch Between Deiveson Figueiredo And Brandon Moreno At UFC 263, We Break Down The Top Fights In UFC Flyweight History
By McKenzie Pavacich, on Twitter @mpavacich_ • Jun. 7, 2021

At UFC 263, a reign will continue or there will be the crowning of the fourth flyweight champion in UFC history, as champion Deiveson Figueiredo and challenger Brandon Moreno square off in an epic rematch.

Johnson vs McCall I

On March 3, 2012, Demetrious Johnson and Ian McCall faced off in the first flyweight fight in UFC history at UFC on FX 2: Alves vs Kampmann. The bout was the first in a tournament series that culminated with the crowning of the first UFC flyweight champion later that year. 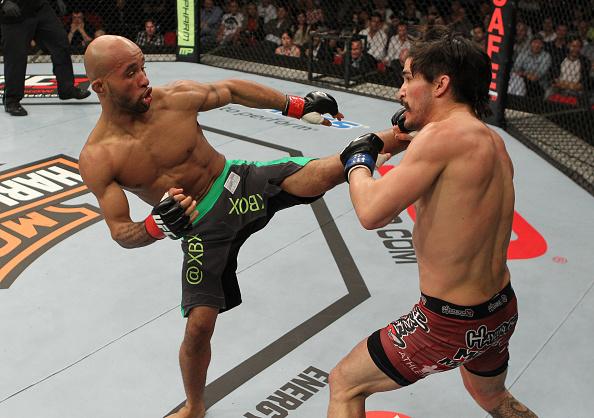 Demetrious Johnson kicks Ian McCall in a flyweight bout during the UFC on FX event at Allphones Arena on March 3, 2012 in Sydney, Australia. (Photo by Josh Hedges/Zuffa LLC)

Johnson and McCall put on a performance for the ages; a matchup filled with top-notch technique and the drama necessary for any fight to transcend the Octagon - a fight ending in a draw - making the inaugural UFC flyweight fight certainly one to remember.

Rematches were no stranger to Demetrious Johnson, as the longtime UFC flyweight champion shut down the chance for a trilogy with dominant performances over three separate opponents during his time in the Octagon. In the fourth rematch of his career, however, everything changed.

The co-main event rematch between Demetrious Johnson and Henry Cejudo at UFC 227: Dillashaw vs Garbrandt II ended in historic fashion, with Cejudo narrowly edging the defending champion Johnson off his throne via split decision, ending the nearly six-year reign of “Mighty Mouse” atop the UFC flyweight division.

Figueiredo vs Moreno I

Of course, we have to give acknowledgement to the first fight that makes this co-main event rematch for the UFC flyweight title at UFC 263 possible to begin with -- the main event of UFC 256 between flyweight champion Deiveson Figueiredo and challenger Brandon Moreno. Just when we thought the conversation about the best fights of 2020 was over, the last pay-per-view of the year delivered in a big way, with an absolute slugfest in the flyweight division going head-to-head with Zhang Weili vs Joanna Jedrzejczyk for Fight of the Year. 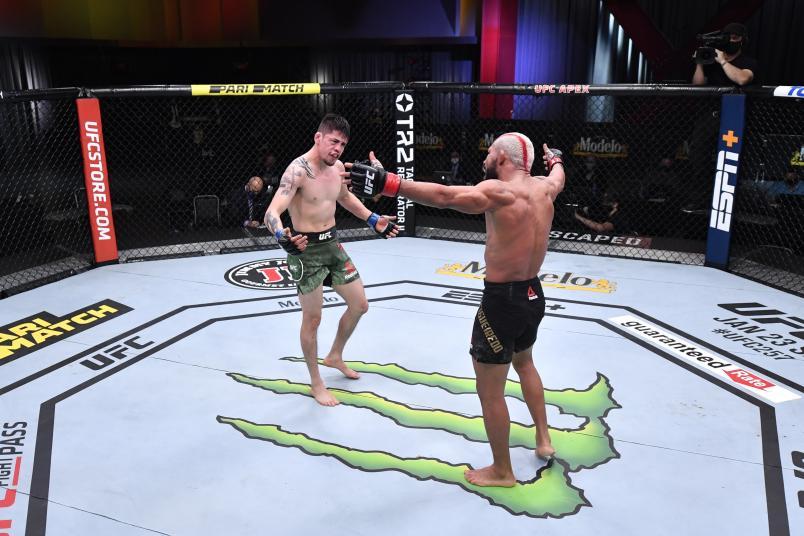 Brandon Moreno of Mexico and Deiveson Figueiredo of Brazil react after their flyweight championship bout during the UFC 256 event at UFC APEX on December 12, 2020 in Las Vegas, Nevada. (Photo by Jeff Bottari/Zuffa LLC)

Both fighters, returning to the Octagon just three weeks after their respective wins at UFC 255, left it all in the cage, keeping a high pace and producing palpable tension through the full 25 minutes, ultimately leading to the majority draw decision delivered by the judges.

Watch Figueiredo vs Moreno I On UFC Fight Pass 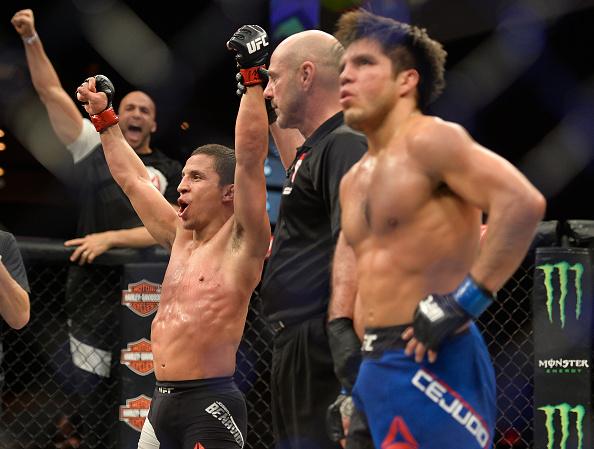 Joseph Benavidez celebrates after his split-decision victory over Henry Cejudo in their flyweight bout during The Ultimate Fighter Finale event inside the Pearl concert theater at the Palms Resort & Casino on December 3, 2016 in Las Vegas, Nevada. (Photo

The finale of The Ultimate Fighter: Tournament of Champions featured Benavidez and Cejudo as the co-main event. Aside from groin strikes thrown by Cejudo in the first round, which led to a penalty, the fight was almost completely statistically even. Benavidez came away with the split decision victory after the reading of probably one of the weirdest judges’ scorecards of all time (29-27 Benavidez, 29-27 Cejudo, 30-26 Benavidez).

It’s crazy to think that in less than a year (359 days, to be exact), Deiveson Figueiredo went from opening the ESPN preliminary card on a pay-per-view event to fighting for the UFC flyweight title for the second time. But that’s the trajectory Figueiredo’s career took between July 2019 and July 2020.

Coming off the only loss in his career to Jussier Formiga, Figueiredo was pitted against Alexandre Pantoja at UFC 240: Holloway vs Edgar. Looking to build on a three-fight win streak of his own, Pantoja was no match for the damage Figueiredo never fails to inflict in the Octagon. While the fight was decided by the judges with 30-27s across the board for Figueiredo, the two earned an extra $50,000 each thanks to a Fight of the Night bonus.

The inaugural showing of the UFC on ESPN, marking the commencement of an unprecedented relationship in mixed martial arts, gave us one of the few title fights to be featured on a non-PPV card. TJ Dillashaw, the UFC bantamweight champion at the time, elected to move down to flyweight to challenge champion Henry Cejudo for his title.

Watch Henry Cejudo in the Octagon after his flyweight title victory over TJ Dillashaw.

This matchup, filled with drama from the announcement of the fight to well past the conclusion of the bout, gave us some of the most entertaining - and cringey - moments in UFC flyweight history. Despite the buildup, it ended quickly and in favor of Cejudo, who claimed he “saved the flyweight division” by successfully defending his belt against Dillashaw.

Sergio Pettis handed Joseph Benavidez his first loss in more than four years on June 9, 2018 at UFC 225: Whittaker vs Romero II. The rising contender, looking to bounce back from a unanimous decision loss to Henry Cejudo six months prior, took on UFC veteran Benavidez on the Early Preliminary card.

A fight that started with Pettis clipping and nearly finishing Benavidez before ending in a split decision, this matchup between the younger brother of former UFC lightweight champion Anthony Pettis and a perennial title contender brought us unpredictable back-and-forth action in true flyweight fashion.

Brandon Moreno has probably spent the majority of his life being regarded as the underdog, but time and time again he proves that it’s not something he’ll let bother him. A good thing, too, because heading into his fight to kick off the main card at UFC Fight Night: Lineker vs Dodson, Moreno found himself as the +385 underdog against a seasoned finisher in Louis Smolka.

No problem for the “Assassin Baby,” who handed Smolka his first loss by submission, and only the second loss of his professional career, in just two minutes and 23 seconds, earning his sixth submission in seven fights and extending his own win streak at the time to nine.

At UFC Fight Night: Johnson vs Moraga on July 27, 2013, Demetrious Johnson was cruising to what would have been his fourth-consecutive decision victory before an opportunity for a submission presented itself.

Pushing the pace for nearly 23 of the 25 minutes slated for the main event matchup between Johnson and John Moraga, the UFC flyweight champion proved once again why he was the king of the flyweight division as he delivered an armbar submission over Moraga at 3:43 of the fifth and final round.

What’s better than one fifth-round submission? Two of them! Four years after Demetrious Johnson’s submission over John Moraga with just over a minute left in the fight, the UFC flyweight champion did it again against Ray Borg in the co-main event at UFC 216: Ferguson vs Lee to successfully defend his title for the eleventh time.

A fight in which both athletes earned Performance of the Night bonuses of $50,000 each, a suplex to an armbar ended it all three minutes and 15 seconds into the fifth and final round. With this victory, Demetrious Johnson set the record for most consecutive title defenses, a record previously held by Anderson Silva.