For his return to lightweight last year, UFC on FUEL TV 9's Ross Pearson got back to lifting heavy iron. Here, a few muscle-carving moves.

How did fighting at featherweight impact your resistance training?
A lot. I didn’t lift, I didn’t squat, I didn’t press, I didn’t pull. It was all conditioning. The guys that are at 145 are super fast and I didn’t think that the speed difference would actually be an issue, but it was.

How often do you engage in resistance training? What is a typical workout?
Quite often, I do a big strength pull, pre-camp, maybe like six to eight weeks of heavy lifting: big
squats, big bench presses, big rack pulls, big pullups, all obviously to build up the strength and get big and strong and ready for camp.

After going to 145 and back to 155, what changes did you notice?
I am a lot healthier, I have got a lot more energy, and I’m sleeping better. When I competed at 145, it was just too hard to live the lifestyle of a fighter and maintain my weight so low, for me. I was acting like a bodybuilder, but living like a fighter. The mix didn’t work for me, especially when I saw I lost the love, and the fun, for fighting because of what I was putting my body through.

How have you gotten back into your old mindset and having fun with it?
A lot of it was actually going away when I was [coaching] on The Ultimate Fighter and helping out the other guys and seeing how much I have developed. That got my mind free and back into gear.

[To do this move, start the exercise at the bottom of a squat. Place a barbell inside a power rack and lower the inside support bars down far enough so that when you get underneath the barbell and place it across your shoulders, you look as if you’re in the bottom position of a normal barbell squat.] Rest the barbell on your shoulders and grab the bar with an overhand grip slightly wider than shoulder-width apart. With your feet shoulderwidth apart and back straight, forcefully stand up until your legs are straight, knees unlocked. Squat back down to place the weight back down on the inside support bars. Repeat.
Start with: 6 sets of 1 rep each at 65% of your max power; rest for 30 seconds between sets 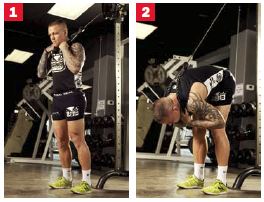 STANDING WEIGHTED CRUNCH
Clip a rope handle to a high cable pulley, grab an end in each hand, then stand with your back to it, knees slightly bent and feet shoulder-width apart. Place your fists down by your chest—elbows pointing down—so that the middle of the rope touches the back of your neck. Keeping your fists positioned by your chest, bend forward at the waist until your elbows touch your thighs. Pause, return to the start position, and repeat.
Start with: 3 sets of 10 reps each, rest 1-2 minutes between sets

SUMO DEADLIFT
Stand straight with your feet wider than shoulderwidth apart, toes pointed out to the sides. Squat
down and grab the bar with an alternating grip (one palm facing in; one palm facing out). With
your head and back straight, stand up, keeping the bar close to your body as you lift. Pause,
then lower the bar back down to the floor.
Start with: 2 sets of 5 reps at 55% max load, rest 2-5 minutes between each set

[For this exercise, loop one end of a resistance band to one side of the bar, stretch the cord
underneath the weight bench, then loop the other end to the opposite side of the bar.] Lie face
up
on an exercise bench with knees bent, feet flat on the floor. Grab the
bar with your hands slightly more than shoulder-width apart, and hold
the bar over your chest, arms straight. Keeping your elbows tucked in,
lower the bar to your chest, then rapidly push the weight back up.
Repeat.
Start with: 3 sets of 1 rep, maximum load that allows you to maintain form, rest 2-5 minutes between sets. 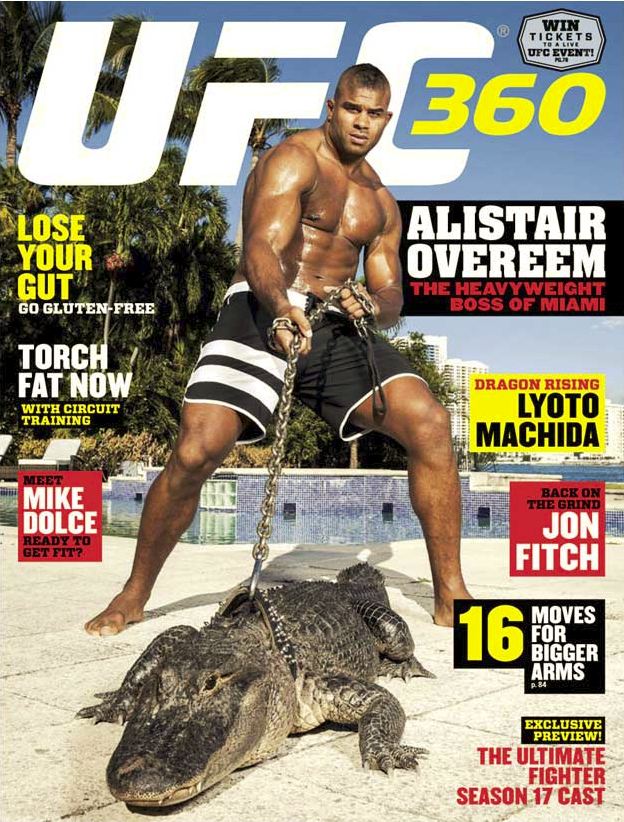 These exercises originally appeared in issue 19 of UFC 360.
Click here to subscribe to UFC 360, the official magazine of
the Ultimate Fighting Championship, available now in print and
digital editions. Copy by Myatt Murphy, photography by Ian Spanier & Cory Sorensen.